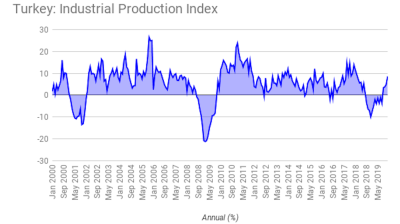 It was the fourth consecutive rise seen in the key indicator with the recovery of Turkey’s economy from last year’s recession accelerating. Before that positive trend began last September, industrial production had contracted for 12 consecutive months.

A Reuters poll for the calendar-adjusted index had forecast that output would increase 7.0% y/y in December.

Month-on-month, industrial production was up 1.9% in December on a calendar and seasonally adjusted basis, the TUIK added.

Turkey's economy contracted year-on-year in the three quarters to mid-2019, then expanded by 0.9% in the third quarter. The Treasury has predicted a surge in GDP growth to 5% in the fourth quarter. Government forecasting anticipates economic growth of 0.5% in 2019 and 5% in 2020.

In a note to investors sent out following the announcement of the industrial output data, Jason Tuvey at Capital Economics said: “The stronger-than-expected Turkish activity data for December suggest that the economic recovery gathered steam in the final quarter of last year. Looser fiscal and monetary policy will keep the economy motoring along in the coming quarters but this is likely to be accompanied by higher inflation and a weaker lira and we expect that the central bank will have to hike interest rates later this year.”

Industry performed much better than many had anticipated in the final month of last year, he added, noting: “In seasonally adjusted terms, industrial production expanded by 1.9% m/m in December compared with a consensus forecast for output to rise by just 0.3% m/m. The breakdown of the data showed that this was supported by a rebound in mining activity.”

The manufacturing sector expanded by a robust 1.9% m/m and utilities output grew for the first time in four months. “There was a similarly strong performance from the retail sector,” said Tuvey, adding: “Admittedly, the 1.1% m/m rise in sales was weaker than the 1.9% increase recorded in November. But as we noted at the time of November’s release, Turkey’s recent embrace of ‘Black Friday’ sales has distorted the data and a slowdown in month-on-month growth always seemed likely in December.”

On the basis of 3m/3m growth rates, retail sales grew at their fastest pace since late 2017, according to Capital Economics.

“As things stand, we estimate that the economy expanded by 1.5% q/q in Q4 but the risks to this forecast are skewed towards the upside,” said Tuvey.

He concluded: “The economy’s strong performance in Q4 is likely to have carried over into this year, supported by looser fiscal and monetary policy. But there are growing signs that stronger growth is fuelling a renewed deterioration in the current account and downward pressure on the lira is likely to mount. This, coming alongside higher inflation, means that after cutting interest rates a bit further at the next few meetings, we expect that the central bank will reverse course and hike rates in the second half of 2020.”

The central bank has slashed its benchmark interest rate to 11.25% in aggressive easing carried out since last July. With annual inflation recorded in January at 12.15%, real interest rates have turned negative.