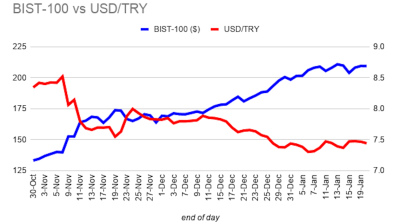 HSBC’s short USD/TRY position in selling USD against the Turkish lira (TRY), which it opened on January 5 with a target of 7.10 and a stop-loss of 7.53, became history within two weeks after the USD/TRY on January 18 moved beyond the British bank’s stop-loss level, BloombergHT reported on January 19.

HSBC lost a nominal 1.9%, according to the publication.

Also on January 19, BloombergHT reported that the most popular Turkish exchange traded fund (ETF), the iShares MSCI Turkey, saw sales of $30.8mn in the first two weeks of 2021.

Turkish ETF investors bought in at very attractive levels in the period prior to the recent Turkish lira and Borsa Istanbul rallies that began on November 9, with the declared change in direction of Turkey’s monetary policy towards tightening. Calls for a correction in prices are spreading.

Meanwhile, Ford Otosan (FROTO) and steelmakers Kardemir (KRDMD) and Erdemir (EREGL) have remained on the rise.

On January 21 at 14:00 Istanbul time, the Turkish central bank will release its next policy rate decision.

Polls show the market expects no change at 17%.

Twenty participants in a Reuters survey predicted that the key rate would be held while three anticipated a 50bp hike and two expected a 100bp hike.

Seventeen participants in a Bloomberg survey opted for no change, two for a 50bp increase and two for a 100bp rise.

At the last rate-setting meeting, the central bank surprised the market with a 200bp hike despite the median expectation for 150bp.

Fourth quarter slowdown was significantly lower than during the first wave of the pandemic, despite worse epidemiological data.

The headline seasonally adjusted IHS Markit Russia Manufacturing PMI put in its strongest growth since April 2019 after registering 51.5 in February, up from 50.9 in January, signalling a marginal improvement in the health of Russian manufacturing.