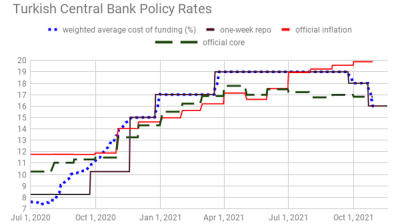 Take your pick. On the one hand, the Turkish Statistical Institute (TUIK) on November 3 posted Turkey’s official consumer price index (CPI) inflation as 19.89% y/y in October, up from 19.58% y/y in September. On the other hand, on the same day, the Inflation Research Group (ENAG), an independent body led by Istanbul academics, gave a figure of 49.87%.

Surveys have shown there is very little faith among Turks in the official inflation data.

For recorded monthly inflation in October, TUIK published a figure of 2.39%, whereas ENAG pencilled in 6.90%.

TUIK calculated “core” inflation at 16.82% y/y, down from September’s 16.98% y/y. That could be important when assessing whether the central bank will bring in another rate cut before the end of year. The regulator has been referring to “core” inflation in its decision-making rather than headline inflation.

On November 2, Burak Uyguner, head of the country’s leather industry association, complained that the natural gas price hikes brought in since January were approaching 150%.

Also on November 1, LPG prices were hiked once again.

On October 28, the central bank hiked its expectation for end-2021 official inflation to 18.4% from the previous figure of 14.1% that was given in its July inflation assessment.

The upper limit on the official inflation forecast was also moved up, taking the expectation to 19.5% from 16%, closer to the market’s current anticipation of something above 20%.

Turkey’s monetary policy has in fact entered uncharted territory since the “core inflation” story ended with the latest rate cut on October 21, when the policy rate was cut to 16%, below what the central bank contends is “core”.

On November 18, the next rates decision will be announced. It is currently 50-50 on whether that will be a hold or a cut.

Following the release of the inflation data, Jason Tuvey at Capital Economics, said in a note: “We have pencilled in 100bp reduction in the one-week repo rate, to 15.00%, at this month’s meeting. And with inflation likely to fall back sharply over the next 6-9 months, further aggressive easing probably lies in store—we expect the one-week repo rate to be taken down to 12.00% by mid-2022.  Given Turkey’s dire external position, however, there’s a significant risk that this triggers a balance of payments crisis.”

The lira loans flow since the easing cycle began remains under close scrutiny. So far, no notable surge has been observed.

The latest all-time weakest rate of the TRY versus the USD stands at the 9.8595 registered on October 25.

Following the October inflation releases, the Erdogan regime was defending the 9.70-level. It defended the 9.60-level between October 25 and November 3.

Five-year credit default swaps (CDS) on Turkey have been in the 430s since November 2.

On the global markets front, the USD index (DXY) has moved up to the 94s. On November 3, a release from the US Federal Reserve open market committee and Fed governor Jerome Powell’s press meeting were the main focus. Some tapering talk is awaited. Whether Powell will be able to avoid a sharp reaction in market prices is under debate.

In foreign policy, Turkish President Recep Tayyip Erdogan got his photocall with Joe Biden at the G20 gathering in Rome on October 31.

It seems Erdogan’s urge to stage a military adventure in Syria remains on hold, as, again it seems, he cannot get the green light from either the White House or the Kremlin. He looks likely to continue chasing this up.

Given the growing rumours about Erdogan’s health, along with the wide array of intractable problems he has accumulated across the last decade, Turkey’s situation remains extremely precarious.

Russia’s gross international reserves (GIR) held by the Central Bank of Russia (CBR) have fallen from $629.4bn on February 25 to $585.7bn as of May 13, a fall of $43.7bn according to the latest data released by the regulator.

The industrial price inflation in April was the second-highest since last November when Gazprom began charging much higher prices under a new contract.

The volume of construction works in Romania increased by 6.5% y/y in the first quarter of 2022.

Trust in TV news is declining among Russians, as social media news gains popularity. At the same time, Russian support for the war in Ukraine appears to be slipping, as does the belief that Russia is winning a global power struggle.

The new government's pledged to improve the economic and political environment has yielded results despite the war in Ukraine and soaring energy prices.

Russia’s CBR reserves down $43.7bn since the start of the war
13 hours ago
Industrial inflation exceeds 25% y/y in Moldova
14 hours ago
Romania’s construction companies post robust 6.5% growth in Q1
14 hours ago
Russians trade TV news for social media as war-weariness sets in
1 day ago
Net FDI in Bulgaria jumps four times y/y through March to €1.05bn
1 day ago