Turkish President Erdogan sacks the governor of the central bank 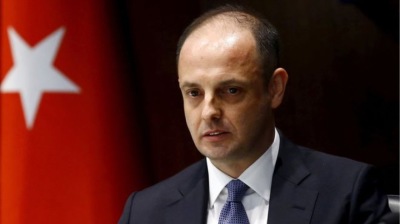 Turkish President Recep Tayyip Erdogan sacked Murat Cetinkaya the governor of the central bank that could plunge the currency into a new crisis
By bne IntelliNews July 6, 2019

Turkish President Recep Tayyip Erdogan has sacked the central bank governor Murat Cetinkaya and at the same time appointed the deputy governor of the central bank Murat Uysal as the new governor. An official announcement appeared on the morning of July 6 in the Official Gazette.

Investors and currency traders are bound to panic after Erdogan used a presidential decree to sack Cetinkaya, whose term has another year to run, and replace him with his deputy.

The new governor Uysal served as Treasury head at state-owned lender Halkbank from 2011 to 2016 and he was appointed as deputy central bank governor in 2016, according to a statement by the central bank.

The bank is due to hold its next Monetary Policy Committee (MPC) meeting on July 25. Uysal will hold a press conference in the coming days, the central bank said.

Market expectations were shaped for the beginning of a rate cut cycle at the July 25 meeting.

However, the latest scandal could further undermine the credibility of the central bank to cut the rates and a sharp rate cut could trigger renewed turbulence in Turkish markets.

Turkey has been enjoying something of a relief rally after Erdogan has accepted the results of the Istanbul local election revote and he seemed to be on good terms with US President Donald Trump last week in Osaka during the G-20 summit, but analysts say the decision to sack Cetinkaya may derail a rally in the lira that started at the beginning of May.

Presciently VTB Capital (VTBC) called on investors to sell Turkish assets on June 6 arguing that the recent bull run had run its course.

“This was a particularly strong rally in a short period of time, outperforming EM indices by 16% during that period. We believe it is not worth chasing this rally, and that in fact it is worth taking profits from a trading perspective,” VTB said in a note.

"This week’s rally in the Turkish lira could quickly go into reverse if US President Trump’s conciliatory comments regarding Turkey’s purchase of Russian defence equipment prove to be a false dawn," Liam Carson of Capital Economics also said on July 5 in a research note entitled "Lira rally may be short-lived".

“Those who removed the central bank governor overnight have lost the right to demand confidence in the country’s economy. The central bank is a captive being kept in the palace,” spokesman of the main opposition CHP, Faik Oztrak, wrote on Twitter.

"Ironically Uysal’s hiring likely makes it more difficult for the CBRT to cut rates as the risk now is that the market reacts badly to this HR change at the central bank. All round an idiotic move," Tim Ash of Bluebay Asset Management said in an emailed note to investors.

However, it should be noted that surprise dismissal of the central bank governor was not contained in any expectations and pricing.

The decision to change the guard at the regulator comes days after Turkey’s real rate soared to a world topping 8.3% as inflation slowed by more than expected. However, the credibility of inflation rates is another question mark. Pricing or planning based on official inflation figures could cause problems in the future.

Erdogan has actually no legal power to sack the central bank governor and his reference to some articles of his own presidential decrees received criticism. However, there is currently no legal ground or any other kind of power in Turkey to prevent Erdogan's decrees.

It was the first time in Turkish history that a central bank governor was sacked by the government, Ugur Gurses, a former central bank official, wrote in an op-ed for DW Turkish.

Back in January 1981, central bank governor Ismail Hakki Aydogdu was compelled to resign from his post by political pressure, a few months after the September 12, 1980 military coup d'etat, but dismissal of a central bank governor directly by the government has never been observed before Cetinkaya.

Although Cetinkaya was thought to be in harmony with the government, some unnamed government officials told Reuters that Erdogan was unhappy about the interest rate and the central bank’s decision in June to keep rates constant added to the problem with Cetinkaya.

Markets had assumed that Erdogan did not want to take the risk of a rate cut prior to the Istanbul revote to be held on June 23 when the MPC passed its June 12 meeting without a rate cut.

One of Reuters' government sources even claimed that the president and his son-in-law, Finance Minister Berat Albayrak, demanded Cetinkaya's resignation, but Cetinkaya reminded them of the bank’s independence and declined to resign.

Based on the comments by the unnamed government source, it could be thought that Erdogan has given the message that the central bank is not independent, even on paper, by sacking Cetinkaya.

However, the reasoning by Reuters' source does not sound logical given the track record and character of Cetinkaya as well as the current situation in Turkey. The story of a government official who resists Erdogan's demands could only be a fictional one under current conditions in Ankara.

Erdogan has actually been too honest for a long while regarding his views on the central bank's independence but markets insist on not acknowledging the situation.

The Turkish government has lately been trying to transfer more funds from the central bank to deal with the booming budget deficit as a result of the ongoing elections cycle.

The government aims to access the central bank's funds and to sharply cut policy rates with the dismissal of Cetinkaya, Gurses wrote, adding that the government is drawing the economy into a new vortex.

Erdogan's latest scandal came days before the expected arrival of S-400 missiles from Russia and market reaction on July 8 will be closely watched.

Armenia’s coronavirus plight worsens with more than 1,000 more infections in two days
5 hours ago
Authorities “may be sowing seeds of Turkish economy’s downfall” by pumping money at fastest rate for more than decade
7 hours ago
Turkey’s electricity consumption collapses 17% in May
1 day ago
Russian government presents National Recovery Plan to President Putin
1 day ago
Belarus president pledges to prevent 'Maidan' during August election as thousands on streets support opposition
1 day ago