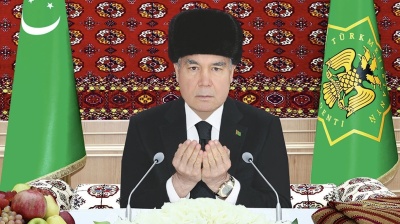 If it gets too cold, the president can always blame somebody else.
By Akhal-Teke: Eurasianet February 24, 2021

Every few months brings news of fresh privatisations in Turkmenistan.

The piecemeal, if slow, sale of state assets is billed as a sign of transition toward market economics.

At an update during the February 19 Cabinet meeting, Deputy Prime Minister Gadyrgeldy Mushshikov said 33 assets were being prepared for privatisation “on a competitive basis.”

Mushshikov did not specify what kinds of assets were up for grabs, but previously published lists of businesses being made available for purchase have tended to consist mainly of retail outlets, storage facilities and food processing plants.

President Gurbanguly Berdimuhamedov is, predictably enough, dissatisfied with progress so far. He told Mushshikov that the process was going too slowly and inefficiently.

Meanwhile, as Vienna-based Chronicles of Turkmenistan has astutely observed, many of the stores being sold are ones where staple goods are made available to the public at subsidised prices. The website wonders what that implies for the price of groceries. Despite living on top of colossal volumes of valuable natural gas, most of Turkmenistan’s population is hard-up and relies on the state’s largesse to balance household budgets.

The long-suffering Mushshikov, who earlier this month received his latest in a string of reprimands, this time for “weak leadership” and allowing underperformance in the “finance and economic complex,” is the point-man on privatisation.

In mid-December, Mushshikov presented a five-year draft strategy and action plan for the reform of state-owned enterprises. As is invariably the case with these matters, the documents were put together with the support of the Union of Industrialists and Entrepreneurs, the parastatal conglomerate charged with midwifing the transition to market rules.

Buyers of retail spots and likely superannuated warehouses should probably not bank on making millions any time soon. But one aspect of the economic transformation programme that looks more lucrative is the one alluding to the introduction of “digital systems and IT technologies.”

Although the details of what this will actually entail are nonexistent for now, it is probably safe to assume nebulous government tenders for IT boondoggles are just around the corner. Nothing uniquely Turkmen about this, of course, but for one detail.

Who was earlier this month appointed deputy prime minister with the portfolio for implementing the adoption of digital systems and innovative technologies at industries and government departments?

That was not Berdimuhamedov junior’s only appointment. He will also occupy a seat on the State Security Council and chair the Supreme Control Chamber, a body which oversees government spending.

Chronicles reported on February 22 on how officials in the regions are already conditioning themselves to anticipate Serdar’s visits as though it were the president himself arriving.

Heads of law enforcement agencies in the Lebap province convened in the city of Turkmenabat on February 11 to receive a briefing on Serdar’s life and career to date. The attending audience was then instructed on the proper way to receive their honoured guest, who is expected to pass through at some point in March or April. Police precincts, prosecutors’ offices and National Security Ministry buildings should be whitewashed and have a fresh coat of green paint applied to their roofs. Immediately before Serdar arrives, any violent alcoholics being held in detention facilities should be removed to another location, lest the dauphin’s eye land upon them during his inspections, Chronicles reported.

At the February 19 Cabinet meeting, however, Serdar’s mind was on other matters altogether.

Serdar did also, though, tell his father about the imminent opening of a new greenhouse complex in the Ahal province.

Although he may be shielded from bad news by his minions, Berdimuhamedov betrays evident signs of awareness that food shortages have been a recurrent problem in Turkmenistan. He spoke at the Cabinet meeting about how efforts are ongoing to provide the population with enough vegetables and melons.

“Potatoes, onions and other types of vegetables are being sowed in the regions in the manner prescribed by agronomists,” he is quoted as having said by the state news agency. “Scientists and experienced agricultural specialists are advising local growers on the adoption of modern technologies during cultivation.”

This concerted exercise in buck-passing to the specialists is a little anxiety-inducing, since it may indicate something is wrong. Berdimuhamedov instructed regional officials to start preparing to sow those aforementioned crops at a government meeting on February 1. Those orders were duly executed in the days that followed – around one month earlier than the sowing is normally done, as Chronicles reported, citing specialist Russian website Meteozhurnal.

Meteozhurnal is not impressed by this attempt to up production and cited weather forecasts to make its case.

Potatoes do not mind cool weather, but they react badly to severe frost.

Sure enough, Meteozhurnal is now forecasting that temperatures on the night of February 25 could drop in some parts of the country as low as -18 degrees Celsius. Turkmenistan has not seen cold like this for almost a decade.

It is worth adding, though, that most meteorological services indicate this snap will be relatively fleeting and that a return to almost balmy conditions will follow in early March.

Berdimuhamedov will hope his gamble has paid off. If it doesn’t, he can always blame somebody else.

Turkmenistan: End of the road for the roaring growth myth?