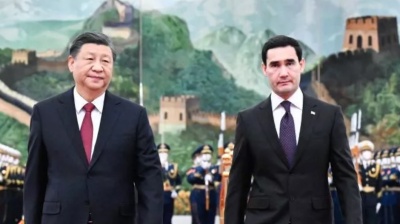 Having a gas. / Chinese government handout
By Akhal-Teke: A Eurasianet Bulletin January 11, 2023

Turkmenistan’s president opened 2023 with a tribute mission to China.

As Serdar Berdimuhamedov noted before his departure from Ashgabat, his state visit carried important symbolic value since it fell on the exact 31st anniversary of the establishment of diplomatic relations between Turkmenistan and China.

After a six-and-a-half-hour flight to Beijing on January 5, Berdimuhamedov was driven in a motorcade to the Diaoyutai State Guesthouse, where North Korean leader Kim Jong-un was put up in 2018.

The lodestar of the Sino-Turkmen relationship at present is the joint declaration on the establishment of a strategic partnership signed in September 2013. The stated mutual objective of dialogue is to take “traditional cooperation to a qualitatively new level that fully meets the priorities of socio-economic development and the national interests of each of the parties.”

Such language is intended to convey the impression that the relationship extends – or will extend in future at any rate – to matters beyond energy trade, although that is indisputably the only area of major importance to both partners.

As Berdimuhamedov revealed in an article published in the state daily, Turkmenistan has to date supplied China with more than 350bn cubic metres (bcm) of natural gas. The fuel was delivered through the Turkmenistan-China gas pipeline, which started operating in late 2009.

“The gas pipeline has become an example of political responsibility, economic realism, and the far-sighted approach of the leadership of the two countries in solving global energy development issues,” Berdimuhamedov wrote, before praising Beijing for creating “international mechanisms for the reliable protection and security of energy supplies.”

These remarks are more than honeyed observations of fact. They imply petitions on two important priorities for Turkmenistan.

Line D would add around 30 bcm of capacity. And in another important detail, while the existing route runs through Uzbekistan and Kazakhstan, the fourth pipeline will run across Uzbekistan, Tajikistan and Kyrgyzstan before arriving in China’s troubled Xinjiang province.

Well, Berdimuhamedov came away with a win on this front. In a joint statement with his Chinese counterpart, Xi Jinping, the leaders committed to “accelerate … construction of Line D of the Turkmenistan-China gas pipeline and other major joint projects so as to intensify cooperation in the gas industry.” Another pledge was that the partners will speed up the second stage of development of Galkynysh, the Turkmen gas mega-field from where all this fuel is supposed to come. The Turkmens formally operate Galkynysh, although this is a convenient piece of fiction to create the impression Ashgabat can run things independently, when in reality the cash and technology predominantly come from Beijing.

Russia may be looking upon all this with some degree of satisfaction.

In early February 2022, a few weeks before he would embark on his disastrous invasion of Ukraine, Russian President Vladimir Putin paid a visit to China. During that visit, Russia’s Gazprom and China’s CNPC signed a 25-year deal for the supply of 10 bcm of gas per year from Russia’s Far East to China via the Power of Siberia pipeline. Other projected future deals envision gas being pumped through a yet-to-be-built strand of the Power of Siberia running through Mongolia and landing in northern provinces of China.

Since the added gas deliveries from Turkmenistan to China will be focused on supplying more southerly customers, there should be little or no sense of competition with Russia.

When Berdimuhamedov talks so pointedly about “security of energy supplies” and the importance of this for the preservation of international stability, it feels like he is seeking to nudge China into getting directly involved in implementation of the trans-Afghanistan Turkmenistan-Afghanistan-Pakistan-India (TAPI) pipeline, which could play a big role in improving the well-being of Turkmenistan’s war-torn eastern neighbour. It does not look like China is taking the bait, though.

Beijing’s contribution to geopolitical order is in chivvying vassal state-lite petitioners like Turkmenistan into signing up to grandiloquent initiatives like the Global Security Initiative, which Xi proposed at a conference in April 2022. In very crude summary, the GSI, as it is known in its abbreviated form, repackages familiar Beijing mantras about respect for sovereignty and territorial integrity. Berdimuhamedov duly pledged his determination to promote implementation of the GSI and then reasserted his government’s opposition to Taiwanese independence for good measure.

Yet one more area in which China and Turkmenistan intend to deepen cooperation, apparently, is space. In an article published in The People's Daily, the Chinese Communist Party’s official organ, Berdimuhamedov thanked China for its help developing the Turkmen space industry, which he said would, among other things, bolster his country’s national security. He did not spell out what he meant by this.

As for honest-to-God commercial deals reached as a result of Berdimuhamedov’s trip, there was little of that. Chinese company CRRC Ziyang revealed on its Twitter account on January 9 that it had reached a $30mn deal to supply Turkmenistan with locomotive spare parts. It was a noteworthy bit of business mainly because back in 2017, Turkmenistan stiffed the very same company over the payment of $2.4mn due for the delivery of a pair of locomotives. It took legal action to resolve the whole impasse.

In one heartening development, Amsterdam-based website Turkmen.news reported on January 3 that the beneficiaries of a mass amnesty declared in December included the imprisoned doctor Khursanai Ismatullaeva. Ismatullaeva was arrested in July 2021 after she went public with claims that she had been unfairly dismissed from a position at a neonatal clinic in Ashgabat in 2017. What really got the doctor into trouble was that she spoke about her situation at an event organised by members of the European Parliament, which the Turkmen police state evidently deemed to be an unseemly act of airing dirty linen in public. Ismatullaeva was sentenced to nine years in prison on almost certainly trumped-up charges of embezzlement in September 2021, but will now be allowed to go free.