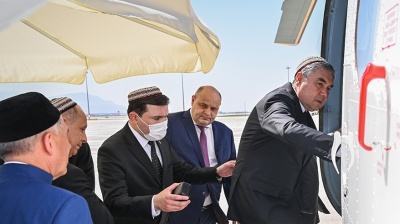 Berdimuhamedov inspects his purchase from Tatarstan.
By Akhal-Teke: Eurasianet May 18, 2021

Turkmenistan may often seem impenetrable, but that does not mean the country is wholly immune to investigative reporting.

On May 13, the Organized Crime and Corruption Reporting Project (OCCRP) published a report providing evidence for how a 39-year-old nephew of President Gurbanguly Berdimuhamedov won lucrative, multimillion dollar food import contracts, despite having no evident background in that line of business.

To the delight of journalists, the nephew, Hajymyrat Rejepov, is not discreet about his wealth. His Instagram account has documented his costly foreign trips abroad and his penchant for luxury watches and cars. An equally imprudent interior designer posted a lengthy, but since deleted, video tour of a gaudy three-storey mansion reportedly purchased by Rejepov after he won the food import contract.

The whole Rejepov crew are living large thanks to their family connections, in fact.

Amsterdam-based website Turkmen.news, whose chief editor was a co-author of the OCCRP piece, published a video story last June dwelling on the acquisitiveness of one Kemal Rejepov, a cousin of the Rejepov mentioned earlier. As his now-hidden social media accounts revealed, Kemal was an avid fan of chunky Swiss-made wristwatches, some of them costing hundreds of thousands of dollars apiece. He also, like his cousin, appeared to own a fleet of expensive cars.

At the head of this clan is Annanazar Rejepov, who is married to Berdimuhamedov’s sister, Durdynabat. If that name is familiar to readers of this bulletin, it is because he was previously reported to own Nusay yollary, one of the subcontractors that in 2019 secured a gig to build the $2.3bnAshgabat-Turkmenabat highway.

Vienna-based Chronicles of Turkmenistan in March reported that work on this highway had been suspended due to a lack of funding. The outlet said that workers had not even been paid for two or three months. The Rejepovs may be making poor use of their liquid assets.

Opening roads to cars is so passé anyway.

Last week, multiple streets in Ashgabat were blocked off to all vehicles other than public transport and taxis. As Ashgabat Mayor Yaztagan Gylydzhov said at a government meeting, these restrictions were brought in on May 10 and will last through to May 25. The purpose, Gylydzhov said, was to promote the environment to mark the 140th anniversary of Ashgabat’s founding.

Berdimuhamedov said at the same meeting that bike-riding was an important way to promote those environmental values. Which is all well and good, but this is not an option for everybody commuting to work. Chronicles reported that drivers of overcrowded buses have over this period been known to hike fares two- or threefold. Social distancing is not a priority anymore it seems. And not that many people are even cycling, making the whole exercise a largely pointless inconvenience.

More grievously, RFE/RL’s Turkmen service, Radio Azatlyk, reported that the road blockages have also caused severe impediments to the movement of ambulances around the capital.

“When we call the emergency services, they immediately ask where the sick person is and they often refuse [to accept the call-out],” the broadcaster cited one correspondent as saying. “They say that ambulances are only able to come after 8 p.m.”

Berdimuhamedov has over the past weeks been engaged in a flurry of telephone diplomacy, speaking to various leaders, most notably: Russian President Vladimir Putin and Turkish President Recep Tayyip Erdogan.

He is busy with hosting duties too. Much attention has been devoted this week to the visit to Ashgabat of the president of the Russian republic of Tatarstan, Rustam Minnikhanov. Turkmenistan tends to engage heavily in its business ties with Russia on a regional basis—Tatarstan and the Astrakhan region, which is home to a small ethnic Turkmen community, are the primary points of reference. 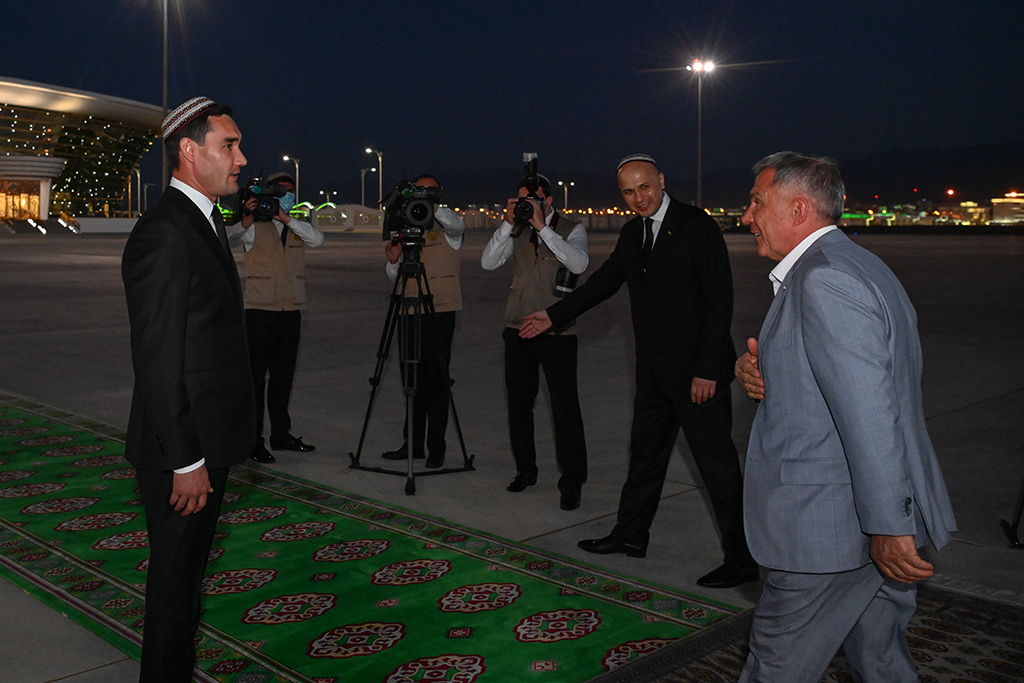 Minnikhanov’s press office is to be commended for producing some vaguely interesting images from this visit. That is how we know that Minnikhanov was met on the runway on May 16 by Berdimuhamedov’s son, Serdar, the presumed successor to the presidency now acting as a de facto head of cabinet in his deputy prime minister role. One lingering shot showed Serdar, having accompanied his guest to the hotel, awkwardly idling by a plant in the lobby before aimlessly slinking away.

Quite what purpose these visits serve is difficult to say. A Turkmen state news agency report on the encounter between Minnikhanov and President Berdimuhamedov relays only bland, generic accounts of a discussion on bilateral cooperation. The only concrete matter was Turkmenistan’s intent to buy some Tatarstan-made electric buses and the successful acquisition of some helicopters. There was also some loose talk about a tie-up between Kazan-based oil company Tatneft and Turkmen energy companies, but it was all highly speculative.

Back at the airport, after being shown a Kazan Helicopter Plant-made Ansat aircraft bought by Turkmenistan, Minnikhanov was again approached by Serdar, who gifted him what was by all appearances a very heavily sedated Alabai sheepdog puppy.

The only sense one could make of such fundamentally aimless visits is to suggest they carry an unspecified symbolic, diplomatic value. Russian engagement with Ashgabat at this time is proving especially intense, perhaps underscoring Moscow’s conviction that this may, for reasons yet to become clear, be a particularly key moment of transition for Turkmenistan.

There was some only slightly firmer-sounding energy cooperation talk on May 13, when Berdimuhamedov met with Rovnag Abdullayev, the head of Azerbaijan state oil company SOCAR. Talk centered on the joint exploration of the Dostluk hydrocarbon field, but it does not yet appear things have moved forward substantially from when a memorandum of understanding on this putative project was signed in January.

The regime is keeping mum on whatever political changes it may or may not have planned, but it does often trot out its talking points about the embrace of market rules. In keeping with that spirit, and in what looks like a development well past its due date, Berdimuhamedov on May 14 approved a resolution to scrap duties on goods exported by private companies as of January 2022. While the 2% rate may have been modest, it was still a superannuated provision in a country purporting to be pursuing more trade with the world.