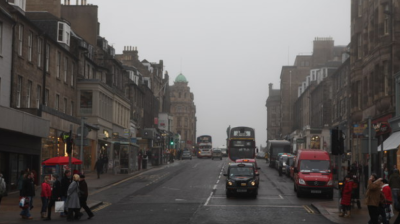 NovoLine Resources is unlikely to have anything to do with Edinburgh beyond its virtual registration.
By bne IntelIiNews March 30, 2021

Edinburgh-registered NovoLine Resources has been blacklisted by the World Bank after an investigation found the shell firm used fake documents to win contracts to supply vital medical equipment to Uzbekistan’s health ministry.

The international financial institution (IFI) banned the anonymously owned UK company from bidding in its procurement processes for three and a half years after determining that it used “fraudulent practices” in an emergency medical aid programme. The move will be seen as tarnishing the already controversial reputation of British corporate governance.

Officials at the World Bank, which was funding the medical equipment purchases, found that NovoLine Resources submitted fake documents, including false financial statements and a false past sales contract on supplying similar kit.

“It is shocking but perhaps unsurprising to see yet more reports of Limited Partnerships registered in the UK being used for illicit purposes abroad,” Glasgow Central MP Alison Thewliss, the Scottish National Party’s shadow chancellor said.

“By continuing to turn a blind eye, the UK government is essentially complicit in facilitating this type of activity,” Thewliss added. “It has to get a grip on this problem and fast, if it cares at all about the UK’s reputation as an honest place to do business.”

There has long been concern about the use of SLPs and other British and international shell firms, especially limited liability partnerships, in Uzbekistan. Such businesses can be purchased online for just a thousand euros. They can be used as a way of hiding beneficial ownership that is more likely to lie ultimately in Tashkent, the capital of Uzbekistan, than in Edinburgh or London.

“UK legal entities are a key feature of the corruption landscape in Uzbekistan,” Kristian Lasslett, professor of Criminology at Ulster University in Northern Ireland, was reported as saying by Open Democracy, adding: “They are used to conceal the identity of politically exposed persons, launder money, facilitate bribe payments, organise frauds, and access the global financial system.

“Because the volume of abuse is so great, compared to the resources made available to UK regulators, the chances of ever being nicked is near enough to nil.”

Lasslett is the director of UzInvestigations. He has previously highlighted the role opaque Scottish and English partnerships play in the Uzbek economy for the independent global media organisation.

“Medical procurement is an area understood to be controlled by a number of politically exposed families in Uzbekistan,” he added. “So it is not surprising to see an anonymous Scottish LP being awarded big ticket items”.

World Bank officials ruled that Novoline Resources “engaged in fraudulent practices by submitting a set of false financial statements and a false past equipment sales contract in its bid for an anesthesia and respiratory equipment supply contract in an attempt to mislead the relevant procurement authority”.

It beat offers from companies in Russia, America, Germany and Japan on price. Other public tender documents reportedly show it also sold unspecified equipment destined for Uzbekistan’s southern Surkhandarya region, through a state body, for more than $300,000.

There is no way of knowing who actually owns NovoLine Resources or who benefited from the profits accrued on the secured contracts. The SLP is registered at a virtual office in Edinburgh’s West End in the same building as an upmarket dog care business, according to The Times.

The UK government is responsible for Scots’ corporate law. In 2017, the UK Conservative administration—after a series of scandals with Scottish shell firms—ordered that all SLPs name a person of significant control (PSC). Many have never complied, or have done so in a way that does nothing to improve transparency.

“The UK’s regulatory regime has severe deficiencies,” Thewliss added. “There remains no proper enforcement around firms declaring a person of significant control (PSC), and Companies House continues to be significantly under-resourced.”