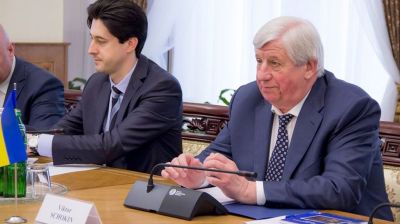 The last shreads of Ukrainian President Petro Poroshenko's creditability could be torn away after the country's controversial Prosecutor General Viktor Shokin, who was supposed to have resigned due to his incompetence, turned up for work on March 16 following a two-week holiday, the Prosecutor General's Office told Ukrayinska Pravda online outlet.

Shokin has come to symbolise everything that is wrong with Ukraine's purported attempt to pivot to the west and adopt European values.

A close associate of Poroshenko, Shokin has been at the centre of claims of rot in law enforcement and failed to bring a single corruption case as the country's top policeman, despite the latest Transparency International 2015 ranking naming Ukraine as the most corrupt country in Europe.

Indeed, only a day earlier, top US diplomat Victoria Nuland, assistant secretary of state for European аnd Eurasian affairs, slated Ukraine for failing to clear out the oligarchs who she claims are derailing the country’s effort to change.

"The oligarchs and the kleptocrats who controlled Ukraine for decades know that their business model will be broken if the Maidan reformers succeed in 2016," Nuland told the US Senate Foreign Relations Committee in reference to the uprising that pushed out Ukraine's pro-Russia government two years ago.

It's Shokin's job to do something about those kleptocrats, but nothing has happened. The lack of progress on dealing with graft has become so blatant that the International Monetary Fund (IMF) suspended its aid programme until there are "significant signs" of progress, IMF director Christine Lagarde warned earlier this year.

The Fund has become increasingly outspoken in its criticism of the Ukrainian government's failure to reach set goals in recent months. The IMF was supposed to transfer $1.7bn to Ukraine at the start of this year, but the money has been held up until Kyiv takes some action. Several billion dollars worth of other aid has also been stymied as it is tied to the IMF approval and distribution of its next tranche.

Poroshenko has been reluctant to sack Shokin from a key politically powerful position, but at the same time needs to keep Ukraine's donors on board. Caught on the horns of a dilemma the president managed to please no one on Febraury 17 when he attempted to shake up the government, publicly calling on Prime Minister Arseniy Yatsenyuk and Shokin to resign. Yatsenyuk survived the vote of no confidence then, but it quickly became clear that Poroshenko had cut a backroom deal with the country's leading oligarchs to keep the PM in place and maintain the status quo.

However, Ukrayinska Pravda reported at the time that Shokin had either gone on holiday or reported in sick. As a legacy of Soviet labour rules  an employee cannot be fired while on holiday or in hospital.

If the reports of Shokin's return are confirmed then his reappearance makes a mockery of the government's promises to reform the government and deal with corruption. The political theatre that accompanied the February shake-up will be exposed as an effort to keep the donor money coming without making any substantive changes at all.

Shokin was appointed in February 2015 after his predecessor, Vitaly Yarema, resigned amidst accusations that he had failed to investigate landmark crimes, including the murder of Euromaidan protesters in Kyiv and the corruption schemes of ousted president Viktor Yanukovych and his allies.

In September 2015, the US ambassador to Ukraine Geoffrey Pyatt publicly criticised the failure of the institution of the Prosecutor General of Ukraine to successfully fight internal corruption. "Rather than supporting Ukraine's reforms and working to root out corruption, corrupt actors within the Prosecutor General's Office are making things worse by openly and aggressively undermining reform," Pyatt said.

The patience of Ukraine's allies is clearly wearing very thin. Nuland told the Senate Foreign Relations Committee on March 15 that the US administration will be able to further support Kyiv if "a new, clean" chief prosecutor will be appointed. The possible return of Shokin would go down very badly in Washington as he has come to personify all of Ukraine’s problems.

According to Nuland, the new prosecutor should be committed to rebuilding the integrity of his office, and investigate, indict and successfully prosecute corruption and asset recovery cases, including "locking up dirty personnel" in the Prosecutor General's Office itself. Shokin's return would send precisely the opposite message.

Ukraine will receive $5.5bn in support from the US later this month
11 hours ago
John Malkovich to turn Skopje into Hollywood of the Balkans
12 hours ago
Envoy says start made on construction of Turkish attack drone factory in Ukraine
21 hours ago
Huge explosion rocks Russian airbase on the Crimean peninsula
1 day ago
Russia cuts oil flow via Ukraine's Druzhba pipeline, blaming sanctions for blocking transit payments
1 day ago