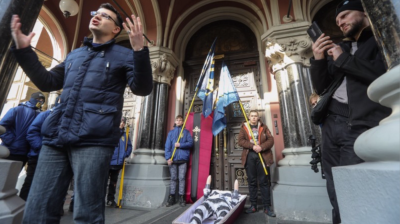 The board of National Bank of Ukraine (NBU) has urged the nation's law enforcement agencies to protect the life and health of its former governor Valeria Gontareva, current leadership, and staff.

The statement followed two incidents with former governor Gontareva and her family. Last week, a car belonging to her daughter-in-law was doused in petrol and burned in front of her house in downtown Kyiv. A week earlier, the former governor of the central bank was hit by a car in London, which led to her hospitalisation with serious injurious.

"While I am in a hospital in London with severe injuries, an attack occurred on my family today... As you know, an accident at a pedestrian crossing in London, and after a few days my children's car burned in Kyiv. These are all links of the same chain," Gontareva said in a statement on September 5. "Unfortunately, not only political terror was launched at me, but, as we see, also physical destruction."

Gontareva won widespread praise from Kyiv's donors and western backers for her work in cleaning up the nation's banking sector, having closed around 80 banks that were involved in money-laundering schemes. She also made the bold decision to nationalise PrivatBank, the country’s largest lender by assets, which belonged to Ukrainian oligarchs Ihor Kolomoisky and Hennadiy Bogolyubov.

In March 2018, Ukraine's parliament, the Verkhovna Rada, appointed Yakiv Smolii, the NBU's acting governor, for the post of central bank head, replacing Gontareva. The move followed the resignation of Gontareva 11 months before this move. Gontareva, who is a close business associate of President Petro Poroshenko, had led the central bank since June 2014.

Gontareva told bne IntelliNews in London in July that she feared for her personal safety after she received death threats, while still running the NBU, which prompted her to resign her post. In her last months on the job the harassment became particularly graphic as a coffin containing a manikin in her likeness was left at the front doors of the central bank. Within a month she was knocked down on a pedestrian crossing in London in a hit and run incident.

According to the NBU's board, recent incidents involving Gontareva and her family in London and Kyiv may indicate that the former NBU governor has become the target of psychological and physical pressure “pursuing a certain goal.”

"The NBU regards this pressure as a real threat to the personal safety of those NBU officials who have implemented and continue to implement financial sector reforms. The NBU believes that these incidents aim to derail the NBU’s efforts as it pursues its mandate, which is to ensure price and financial stability as a basis for sustainable economic growth," the regulator said in a statement last week.

The NBU's board calls on law enforcement authorities to promptly conduct an impartial investigation of these incidents, prosecute those responsible, and safeguard the life and health of the NBU’s former governor, current leadership, and staff.

On September 6, US Embassy in Ukraine said in a special tweet that it supports "a prompt, impartial investigation" involving the incidents involving Gontareva and her family

COMMENT: Attacks on Ukraine’s reformers go unpunished at home, but the US justice system is going after Kolomoisky

COMMENT: Attacks on Ukraine’s reformers go unpunished at home, but the US justice system is going after Kolomoisky
Ukraine’s consumer inflation stayed at a 2.4% y/y level in July
Joe Biden condemns “Lukashenka” violence against Belarusian protesters using the Belarusian spelling of the president’s name