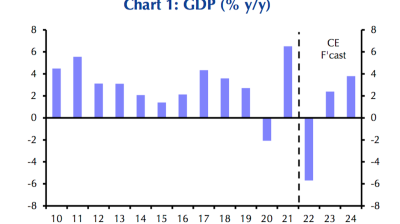 The Russian economy will “collapse”, Ukraine will be “devastated”, while the knock-on effects of the Ukraine conflict and sanctions could plunge several CEE countries into recession this year, according to a new set of forecasts from UK consultancy Capital Economics released on April 20.

“The war in Ukraine has delivered a major shock to which the economies of Emerging Europe are among the most exposed in the world,” Capital Economics says.

For Russia, the hit from sanctions will lead to a 12% fall in GDP this year and an 18% decline from peak to trough, constituting its worst recession since the 1990s. At the same time inflation will hit 23%. GDP will also fall 1.5% in 2023, the consultancy argues.

“The authorities seem to have done enough to prevent a financial crisis from taking hold and Russia is emerging from the most acute phase of its crisis,” it says.

However, it warns that future tougher sanctions could lead to defaults and bank collapses. Banks have been weakened, particularly smaller banks with limited capital, which will lead to weaker lending. Defaults could keep borrowing costs expensive.

The only silver lining is likely to be the $100bn boost to energy export revenues from higher prices this year, which will boost the current account surplus.

Capital Economics says the Ukrainian economy could halve this year, given the experience of other states suffering wars, which will eventually require it to carry out a sovereign debt restructuring. However, the economy could also bounce back with 40% growth in 2023.

The IMF this week predicted that Russian GDP would fall by 8.5% this year, while Ukraine's would collapse by 35%. Earlier this month the World Bank forecast falls of 11.2% and 45% respectively.

Growth cut across the region

The impact of the loss of trade with Russia and Ukraine, as well as the hike in energy costs, will plunge Bulgaria, Slovakia and the Baltic states into two quarters of negative growth (the definition of recession), the long time bearish consultancy argues, and cut GDP growth across the region.

“The Baltic States and Bulgaria depend more than anywhere else on Russia for their exports and imported intermediate inputs. And Slovakia, Czechia, Hungary and Poland depend heavily on Russian oil and gas for their imported energy needs,” Capital Economics says.

Inflation will hit double digits because of commodity prices and supply chain problems, on top of existing pressures on core inflation. This will hit real incomes and consumption.

Industrial production fell in the first quarter because of supply chain problems caused by the Ukraine conflict.

At the same time CEE growth will be hit by weaker external demand in the Eurozone and central banks will be forced to continue monetary tightening as the currency bloc itself begins to tighten.

Central banks across the region are likely to continue to raise interest rates and keep them raised to dampen inflationary expectations.

External deficits will widen under the impact of higher prices for Russian energy and other commodities, leading to potential problems in Hungary and Romania.

Meanwhile, the macro-economic imbalances in inflation and current accounts, the risk of Eurozone recession, and the global monetary tightening will lead to the depreciation of the region’s currencies.

For Poland and Hungary Capital Economics predicts stronger growth because of the loose fiscal policy pursued by their radical rightwing governments, as well as their better labour market dynamics, with 12% nominal wage growth predicted for Poland this year.

But the tight labour markets and supply constraints will also worsen current account deficits and inflation, while budget deficits could blow out and inflation could become entrenched with wage-price spirals, all leading to currency depreciation.

“We’re particularly hawkish on interest rates in Poland given the growing risk of a wage-price spiral,” Capital Economics says, adding that for Hungary, “the emergence of twin budget and current account deficits present a threat to macro stability”.

For the Czech Republic, high inflation means that real wage growth in Q1 will be deeply negative, particularly given the fact that the centre-right government is not fully shielding consumers from energy price rises.

Credit growth will remain sluggish because of the central bank’s tight monetary policy. Capital Economics predicts an economic contraction in Q2 and full-year growth of just 2%.

For Romania, the consultancy predicts that Q1 GDP declined by 0.4% quarter on quarter, and Q2 GDP is likely to be negative, with full-year GDP reaching just 1.8%. High inflation and a current account deficit of 8.3% will create more depreciation pressure.

“That will make Romania much more vulnerable to a deterioration in global risk appetite that may arise from a possible euro-zone recession or concern about aggressive Fed tightening,” Capital Economics argues.

Turkey remains the large economy with the biggest macro-economic imbalances, as well as low FX reserves and large external debts.

Capital Economics expects Turkish GDP to have contracted at the start of the year and says the economy will struggle to regain momentum, managing only 0.3% growth over the full year.

The consumer-facing sectors have been hit by the huge inflation rate, Russian tourism has plunged, while the tight monetary conditions are hitting investment.

Capital Economics says the external, fiscal and banking sector risks are likely to mount and could lead to “fresh sharp and disorderly falls” in the lira.