Ukraine consumer prices rise by 0.7% m/m in May 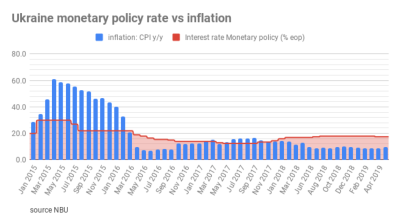 Inflation pressures in Ukraine have not subsided despite the central banks decision to keep interest rates high making more cuts in the near term unlikely. Ukraine’s consumer inflation accelerated to 9.6% year-on-year from 8.8% y/y in April and rose to 0.7% month-on-month in May after rising 1% m/m in April, driven mostly by prices for food and transportation, according to the nation's state statistics service Ukrstat.

Core inflation (the consumer basket excluding goods and services with the most volatile prices) slowed to 0.2% m/m growth in May from 0.4% m/m in April. Annual core inflation stayed unchanged at 7.4% y/y.

The National Bank of Ukraine (NBU) kept rates on hold in June at 17.5% as it has prioritised fighting inflation over boosting growth.

"The decision was required to neutralize inflation risks, which have increased since the previous decision taken in April, and to attain the 5% inflation target next year," the NBU said on its website. Consumer price inflation continues to be above the NBU's in recent months. However, the acceleration is mostly driven by temporary factors, which include higher prices for some vegetables and fuel, the NBU said in a report accompanying the rate decision this month.

Polish PMI advances but remains below 50 points as restrictions lifted
18 hours ago
Czech PMI slightly up in June but still under 50-point threshold
21 hours ago
Russian corporate profits recovering, but still down by half on 2019 in April
1 day ago
Real wages in Ukraine increased 1.4% y/y in May, after sliding 0.6% y/y in April
1 day ago
June PMI shows Turkish manufacturing back on expansion path
22 hours ago