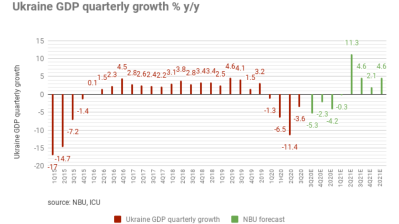 In the third quarter of 2020 Ukraine's GDP declined by 3.6%, and the figure for the January-September period amounted to 5.5%, the Ministry for Development of Economy, Trade and Agriculture announced on November 5.

"According to the results of the first nine months of 2020, the reduction of the composite production index (CPI) slowed down and amounted to 6.2% (6.5% in January-August, 6% in the third quarter of 2020). Accordingly, the Economy Ministry estimates the decrease in the volume of GDP at 5.5% (at 3.6% in the third quarter of 2020)," the ministry said.

The Economy Ministry recalled that earlier in the first nine months of 2020, GDP was expected to fall by 6.5%.

The corresponding forecasts remain on the condition that the situation with the coronavirus infection rate, both in Ukraine and in the world, does not deteriorate significantly by the end of the year, and preventive measures will not be strengthened, in particular, a strict long-term quarantine will not be established in a broader territory of Ukraine.

A separate factor influencing GDP until the end of the year is the downward dynamics in agriculture, including crop production, along with a low yield of grain and oilseeds, as well as vegetables and fruits.

The Economy Ministry said that in the event of a prolonged lockdown in Ukraine and in the world, the fall in GDP in the fourth quarter could turn out to be significantly worse than forecast and amount to 6% y/y. As a result, under such conditions, the economy may contract by the end of the year by 5.6% y/y.