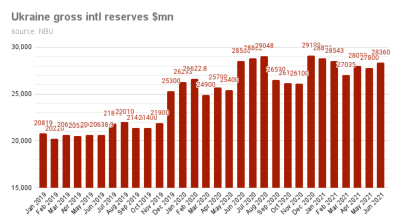 Ukraine gross reserves increase 2% in June to $28.36bn to 4.3 months of import cover, more than enough to ensure the stability of the hryvnia.
By bne IntelliNews July 9, 2021

The new government borrowing in foreign currency, coupled with the NBU’s interventions at Ukraine’s FX market, compensated for the government’s payments on foreign and domestic debt.

“An incredibly favourable situation at Ukraine’s FX market prompted the NBU to renew the purchase of foreign currency,” Evgeniya Akhtyrko of Concorde Capital said in a note. “By and large, an additional currency inflow at the market was generated by the purchase of UAH denominated local bonds by non-resident investors. In particular, the volume of local bonds in portfolios of non-resident investors increased by around $450mn in June.”

In June, the foreign currency inflow to the government’s accounts amounted to $1.1bn (in the equivalent). In particular, receipts from placements of local Eurobonds amounted to $726mn.

The net purchase of foreign currency by the NBU at the FX market amounted to $583mn in June.

The NBU also reported a $181mn decline in the value of its securities portfolio.

As of July 1, Ukraine’s gross reserves amounted to 4.3 months of imports, the NBU said.

“The major outlay in foreign currency in July is the redemption of local Eurobonds for $350mn on July 29,” Akhtyrko added. “MinFin is likely to compensate for this outlay with receipts from new placements of local Eurobonds during the month. We expect the activity of non-resident investors at UAH debt market to weaken in July. Therefore, the NBU’s FX interventions are likely to lessen as well. The most likely case is that the NBU’s international reserves will stay flat in July.”