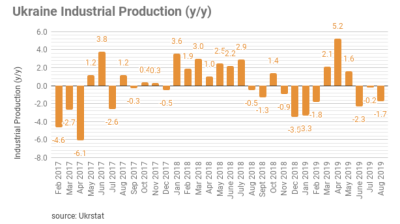 Evgeniya Akhtyrko at Kyiv-based brokerage Concorde Capital wrote in a note on September 24 that Ukrainian industry is failing to show any signs of improvement. "Surprisingly, the food industry is not able to demonstrate consistent growth despite swelling harvests for the second year in a row," she added.

Meanwhile, output in the machinery and metallurgy sectors continues to decline as domestic demand remains weak and the situation at the external markets is cloudy. Industrial output is not likely to show any noticeable growth in 2019, Akhtyrko added. "The weak industrial performance will negatively affect overall economic growth, resulting in slower GDP growth in the second half of 2019."