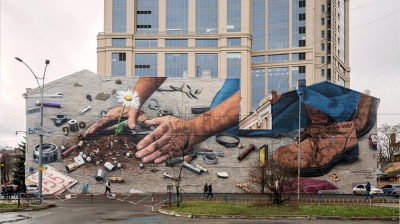 More difficult are Moscow’s demands that Russian be returned to the status of an official language for the country and that Russia would retain control over the Donbas and Crimea. / wiki
By Ben Aris in Berlin March 16, 2022

Ukraine took a step closer to peace with Russia after outlining details of a 15-point peace deal, the Financial Times reported on March 16, citing several sources briefed on the progress of the talks.

Amongst the main points are that Ukraine would agree to neutrality and rescind its aspirations to join Nato. It could keep its army but with limits on its armour and Kyiv would have to agree not to host any foreign military bases. These are points that Kyiv has already said it was willing to entertain in recent days after the presidency admitted that it has no real prospects of joining Nato in the foreseeable future.

More difficult are Moscow’s demands that Russian be returned to the status of an official language for the country and that Russia would retain control over the Donbas region as well as Kyiv’s official recognition that Crimea is Russian sovereign territory.

Under the Poroshenko administration the government passed a series of laws downgrading the status of the Russian language, which is widely spoken, and forcing all Russian language publications to produce Ukrainian language versions. Caps on the amount of Russian language content TV broadcasters could carry were also introduced.

The plan if agreed also contains details of a ceasefire and the withdrawal of Russian troops from around the capital Kyiv. Since the weekend a 60km column of heavy armour to the north of Kyiv has disbursed and spread out on the approaches to the capital in apparent readiness to attack the city.

As bne IntelliNews has been reporting, the face-to-face talks in locations on the border with Belarus, which started shortly after Russian forces crossed the border, broke up last week without any conclusion. The fighting immediately intensified as Putin’s campaign to secure a new security deal went into the fourth phase, which threatened to be even more destructive and deadly than the initial attack on Ukraine that started on February 24.

However, the talks were resumed over the weekend of March 12 in a video format and both sides started to report significant progress. The negotiators have met every day this week online and split into working groups to deal with specific issues, which suggested the attempts to thrash out the details of a deal were progressing.

The delegates are now working on a concrete 15-point deal, according to the FT’s sources – five people who have been briefed on the progress of the talks.

The negotiators discussed the full 15-point plan in detail on Monday, March 14, after the outlines of the deal were sketched out over the weekend. Amongst the key features was for Ukraine to return to the neutrality it had previous enshrined in the constitution until the 2014 Euromaidan revolution, when the constitution was changed to make Nato membership a national aspiration. That clause will now have to be rescinded and the neutrality clauses returned.

Ukrainian President Volodymyr Zelenskiy has been hinting strongly in the last weeks that Ukraine had abandoned its hopes to be allowed to enter Nato and said so explicitly in a video statement on March 16.

Zelenskiy told the population in a video address on March 16: “We realise Ukraine will not become a member of Nato. We understand this, we are adequate people."

The military portion of the deal contains a commitment to not hosting any foreign military bases or weaponry in exchange for the protection of allies like the US, UK or Turkey, the sources said.

The terms of the deal as reported suggest that Moscow would not be against Ukraine entering into security agreements with its Western partners, but there would a complete ban on those agreements leading to any presence of arms or foreign soldiers on Ukraine’s territory.

Previously during the Belarus border phase of the talks, when Ukraine’s mooted neutrality became a talking point, the Ukraine delegation suggested that in parallel with this commitment Ukraine reach security deals with major Nato members such as the US and the UK, without contradicting its commitment to neutrality.

There has been no mention by either side of Russia also offering Ukraine a security guarantee or formally renewing its guarantee of Ukraine territorial integrity that it first made in the Bucharest memorandum in 1994, when Ukraine agreed to transfer its nuclear weapons to Russia.

Moscow has been bitterly complaining about the build-up of foreign arms and Nato “trainers” in Ukraine in the last years and its fears of Ukraine’s de jure joining Nato some time in the future have shifted to Ukraine de facto joining gradually in the nearer-term because of the closer cooperation and materiel supplied by allies such as the US.

Moscow’s insistence on forcing Ukraine to concede territory remains an extremely difficult pill for the Ukraine president to swallow. Moscow has long sought to persuade Kyiv to concede the Crimea as Russian sovereign territory, but now it is also demands that Kyiv allows the once prosperous Donbas region to secede.

Last week’s talks failed after Kyiv signalled that the neutrality question was straightforward, but Zelenskiy added that he would concede “not an inch” of territory to Russia.

But things have changed after a barrage of missiles rained down on cities such as the southern port of Mariupol, which led the death toll across the country to rapidly rise. Zelenskiy in his video addresses to the population has been upbeat on the progress of talks in the last two days but Kyiv remains wary and mistrustful of the Kremlin. One of the FT’s sources speculated that it was a trick to buy time to allow Russia to regroup its forces.

However, as I've argued, Putin is playing a “game of chicken”: ratchet up the tension with military threats in bold moves, but then pause to hold talks on Russia’s demands. The military tension was ratcheted up considerably this week as the fourth phase of Putin’s campaign got underway but if there is a deal Putin is likely to start winding them down again.

The signals coming from the Kremlin on March 16 as a concrete deal appeared to emerge have been mixed. Putin himself has taken a hard line and downplayed the chances of closure. In a televised government meeting he warned the “fifth column” of Russians who had “villas in Miami or the French Riviera, who live there but don't think of here, of Russia,” saying these people need to be scourged from society. He also lambasted the government in Ukraine, saying they weren’t taking his demands seriously.

Russian Foreign Minister Sergei Lavrov on the other hand was much more upbeat, holding out hope that a deal could be done.

Lavrov told the RBK newspaper earlier the same day that he sees "some hope" for reaching a compromise in the negotiations between Moscow and Kyiv to end the war and there were already positions upon which the sides "are close to agreement". Lavrov said Ukraine's political and military neutrality in exchange for security guarantees from Moscow was now being "seriously discussed".

A Russian source briefed on the talks told the FT that the deal on the table, if agreed, could give both sides a way of credibly claiming victory in the showdown.

“Every side needs a win,” the Russian source told the FT. “he needs to be able to sell it to the people. Putin can say that we wanted to stop Ukraine joining Nato and putting foreign bases and missiles in its territory. If they do that, he can say, “I got it.”'

Ukraine anti-corruption officers raid home of Kolomoisky
2 hours ago
Bulgaria starts construction of gas link with Serbia
11 hours ago
RBI's 2022 profits soar to €3.6bn, with Russian operations representing more than half
1 day ago
Hawkish Iran helped stop larger Azerbaijani attacks says Armenia
1 day ago
Only Hungary and Russia heading for recession in 2023 as Emerging Europe shows its resilience
1 day ago