Ukraine’s banking sector made good profits in September, but NPLs remain a problem 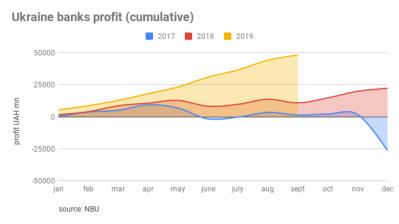 Ukraine’s banking sector made good profits in September, but NPLs remain a problem.
By Ben Aris in Berlin November 4, 2019

Ukraine’s banking sector had a profitable September, earning UAH4bn ($161mn) in the month to bring the cumulative earnings for 2019 to UAH48.4bn as of September.

That is a lot better than last year. The banking sector lost money in September in the last two years, losing UAH2.8bn and UAH2bn in 2018 and 2017 respectively. And by September 2018 the sector had only earned a meagre UAH10.9bn – a fifth as much as this year but still almost ten times more than the UAH1.4bn it had earned in the first nine months of 2017.

As the charts show the sector has clearly returned to health and profits are rising, but serious problems remain. 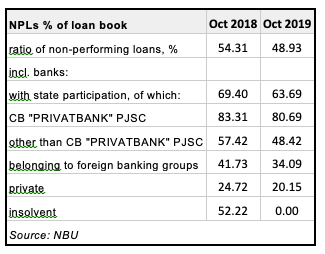 Despite the growth in profits the level of non-performing loans (NLPs) in the bank sector remain extremely high. The sector average of NPLs fell under 50% for the first time in years this summer and was 48.9% as of October this year, however, the distribution of NPLs remains very uneven.

One piece of good news is that the NPLs of the banks deemed insolvent have been written down and their share in the overall NPLs in the sector has been removed, improving the health of the whole sector. Another piece of good news is that most of the NPLs have been provisioned for so they do not represent a systemic risk to the system. But the downside of this prudence is that a lot of banking capital is now tied up as provisions for bad debt. However, as the sector continues to return to health and these bad debts are either paid off, or written off, the release of capital provisions means the sector can dramatically accelerate once the momentum towards recovery begins to build as this capital becomes available to fund lending.

While NPLs amongst the state-owned banks are still a high 63.7%, the average is pushed up by PrivatBank, which was nationalised in December 2016 and has an NPL ratio of 80.7%. That high NPL ratio is a result of its former owner oligarch Ihor Kolomoisky stripping the bank of its deposits and walking off with an estimated $7.6bn in assets, the new management of PrivatBank told bne IntelliNews in an interview in July. Although Kolomoisky has been ordered to return this cash, he has so far ignored the National Bank of Ukraine (NBU) demands and has returned to Ukraine where he has gone back into business with impunity.

Counting out PrivatBank from the state bank portfolio, the picture looks better with NPLs at state-owned banks falling slowly but steadily to 48.4% as of October, according to the NBU. Foreign owned banks look even better with 34% NPLs, and privately owned banks reported NPLs of 20%.

PrivatBank stands out as the single biggest problem for the banking system. Kolomoisky has been trying to force the government to return the bank to his ownership in a blizzard of lawsuits. However, the NBU says that if the courts order the bank to be returned, the central bank will remove the circa $5.5bn of public money that was injected into the bank at the time of its nationalisation, which will immediately cause it to collapse and be nationalised again as a systemically important bank.

Ukrainian President Volodymyr Zelenskiy has been vague on the fate of PrivatBank, but more recently, after the International Monetary Fund (IMF) froze its negotiations on a new Extended Fund Facility (EFF), the president has come out more forcefully to say the bank will not be returned to Kolomoisky.