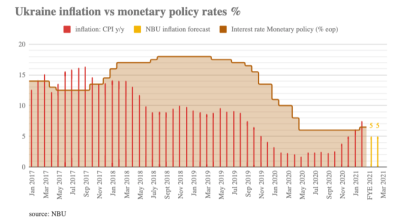 Annual inflation in Ukraine sped up to 8.5% year on year in March from 7.5% y/y in February, the State Statistics Service reported on April 9, making a rate hike at this week’s monetary policy meeting likely, say analysts.

Ukraine’s consumer prices jumped 1.7% month on month in March after increasing 1.7% m/m in February mostly due to rising prices for food, transportation as well as clothing and footwear.

“Monthly inflation in March was higher than in the three previous years. It looks like unleashed food prices turned the consumer inflation to a self-sustaining phase,” Evgeniya Akhtyrko of Concorde Capital said in a note. “A surge in prices for clothing and footwear is hard to explain as the demand for non-food retail items remains weak amid lowered consumer activity during the pandemic era. Possibly, the non-food retailers just pulled up their prices as a result of a bandwagon effect amid other fast growing consumer prices.”

Prices for housing and utility services remained flat in March (after declining 1.8% m/m in February).

The substantial acceleration of consumer inflation is likely to prompt the National Bank of Ukraine (NBU) to hike its policy rate at its April 15 meeting by at least 1 pp from 6.5% today.