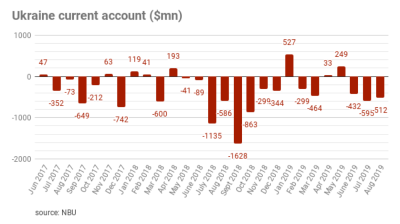 The slower growth of goods imports was mostly due to weaker growth of machinery imports (24.8% y/y growth in August vs 36.0% y/y in July).

“The high volume of agricultural exports and weak energy imports helped to keep the C/A deficit in moderation. However, we expect this export growth to slow through the year end owing to the high comparative base of the previous year. At the same time, the appreciation of the national currency might further fuel imports, especially among consumer goods,” Evgeniya Akhtyrko of Concorde Capital said in a note. “We project the C/A deficit to grow to $5.4bn in 2019 (vs. $4.3bn in 2018) due to the widening trade deficit.”

Russia's services PMI bounces back to 35.9 in May from a record low of 12.9% in April, but business still contracting
1 hour ago
Easing of lockdowns offers hope to emerging Europe’s COVID-struck economies
22 hours ago
Kazakh manufacturing ekes out PMI expansion in May
1 day ago
A third of Russians are ready to participate in a mass protest against falling living standards
1 day ago
Romanian banks post 9% y/y smaller profit in Q1
1 day ago