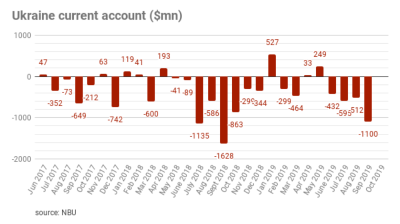 Ukraine’s current account (C/A) deficit grew to $1.1bn September from $0.4bn in August due to a deteriorated balance of primary income and increased trade deficit, the National Bank of Ukraine (NBU) reported on October 31.

The balance of primary income switched to a $102mn deficit from a $513mn surplus in August mostly due to coupon payments on international Eurobonds of $556mn during the month.

The slower growth of goods imports was mostly due to a steep decline in imports of mineral products (19.2% y/y growth in September vs. a 3.6% y/y decline in August).

The financial account surplus enlarged to $1.2bn from $0.5bn in August. In particular, net portfolio investment switched to a surplus of $111mn in September from a deficit of $313mn in August.

“The accelerated growth of exports in September was mostly due to last year's low comparative base in food exports, which are the largest item among Ukraine’s goods exports. The growth of goods imports remains relatively weak due to lower payments for energy imports,” Evgeniya Akhtyrko of Concorde Capital said in a note. “Our current 2019 C/A deficit projection of $5.4bn is likely to be the subject of revision. Now it seems too high as goods imports are growing slower than we expected.”

Turkey sees unexpected rise in inflation as lira weakness pushes up prices
23 hours ago
Russia's services PMI bounces back to 35.9 in May from a record low of 12.9% in April, but business still contracting
1 day ago
Easing of lockdowns offers hope to emerging Europe’s COVID-struck economies
2 days ago
Kazakh manufacturing ekes out PMI expansion in May
2 days ago
A third of Russians are ready to participate in a mass protest against falling living standards
2 days ago