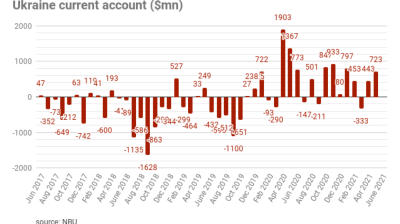 Ukraine’s current account surplus grew to $723mn in May thanks to high commodity prices and especially to mineral exports, up 188% y/y.
By bne IntelliNews July 1, 2021

Ukraine’s current account surplus grew to $723mn in May, up from the $443mn the country earned in April (a result revised down from the previously reported surplus of $837mn) mostly due to a trade surplus swollen by strong exports and high commodity prices, the National Bank of Ukraine (NBU) reported on June 30.

The goods trade balance switched to a surplus of $164mn from a $154mn deficit in April, while the surplus of trade in services declined to $376mn from $461mn in April.

“The boom in Ukraine’s external trade continues. The export receipts are ballooning amid an incredibly favourable global price situation for iron ore and ferrous metals. The growth of Ukraine’s other export items is also strong, and this is not only the result of the low comparative base of the previous year. Goods imports in money terms in May were lower than the local maximum reached in March,” Evgeniya Akhtyrko of Concorde Capital said in a note.

The deficit of the primary income balance shrank to $140mn, from $180mn (revised from the previously reported surplus of $197mn) in the prior month. The surplus of the secondary income amounted to $323mn, staying almost flat month on month.

The deficit of Ukraine’s balance of payments amounted to $280mn in April (vs. a $795mn surplus in April).

“Given such a significant statistical revision, our forecast of C/A surplus of $0.5bn for 2021 now looks less easy to achieve. However, if external trade remains in its current balance, this forecast will remain relevant,” Akhtyrko concluded.

This article is from bne IntelliNews Ukraine monthly country report. Sign up to receive the report to your inbox each month, which covers the slow moving macro- and micro-economic trends, the major political news and a round-up of the main sectors and corporate news. First month is free and you can unsubscribe at any time.