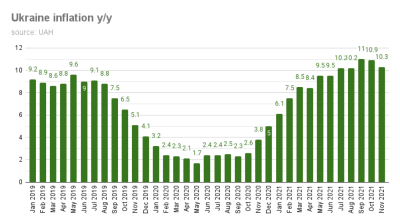 The National Bank of Ukraine (NBU) hiked rates by 50bp on December 9 to bring the prime rate to 9% as it continues to fight stubbornly high inflation.

"The Board of the National Bank of Ukraine has decided to raise the key policy rate to 9% per annum. The decision is aimed at neutralising the impact of additional pro-inflationary risks, improving inflation expectations, and ensuring steady disinflation toward the target of 5%," the regulator said as cited by Interfax Ukraine.

Inflation has surged in the last year and a half after it fell to a post-Soviet record low of 1.7% in May 2020, but as the country began to recover from the coronacrisis prices swelled, largely driven by rising food prices and effects from the distribution to supply chains.

The NBU was the first central bank to move early in 2021 with a rate hike to try to head off more price increases, but the hike was unsuccessful, setting off a string of hikes that were soon copied by other central banks in the region. The NBU rate hikes comprised: March (50bp), April (100bp), flat in June, July (100bp) and September (50bp).

However, the rate increases seem to be finally having an effect. Inflation peaked at 11% in September and has fallen in the last two months to the current rate of 10.3%. Inflation is expected to continue to fall in 2022 as the economies of the world finally rebalance and some sort of normality returns.

In its statement the NBU said it stands ready to make more rate hikes if pro-inflationary forces persist.

The NBU said that the inflation surge has passed its peak, but inflation is declining slower than expected.

The current inflation trajectory remains higher than expected in the October macroeconomic forecast of the NBU. In particular, second-round effects from rises in food and energy prices put higher pressures on prices of an increasingly wider list of consumer-basket goods and services. Inflation is also fuelled by businesses' higher expenses on logistics and wages.

In addition, the NBU also said the following in its statement:

"Food inflation will decelerate due to both large harvests gathered this year and a correction of global prices in 2022. Natural gas prices in Europe are also expected to go down in spring, after the heating season is over. The underlying pressure will also ease gradually in view of the expected slower growth in wages next year and the sustained effect of monetary policy tightening by the NBU.

"In late November, the IMF Executive Board made a decision to give Ukraine a second tranche of about $700mn (in the equivalent) under the current stand-by arrangement (SBA), while also extending the arrangement. Continued co-operation with the IMF and other official lenders will help the government carry out key reforms and facilitate the rapid recovery of the Ukrainian economy from the coronavirus [COVID-19] crisis.

"Considerable uncertainty over whether or not the military conflict will escalate could worsen expectations, in particular inflation expectations, and cause investors to put off their investment decisions, which would dampen economic recovery.

"A related geopolitical risk arises from high gas prices persisting longer than envisaged in the forecast. The risk of a further increase in global food prices also remains important. Through second-round effects, these factors could push up prices for an increasingly larger number of goods and services.

"Prolonged and higher global inflation, especially a surge in inflation in central and eastern Europe, could also put pressures on domestic prices in Ukraine. A faster-than-expected monetary response by leading central banks poses the risk of there being capital outflows from emerging markets.

"The economic repercussions arising from the spread of new coronavirus variants are creating a lot of uncertainty. However, these repercussions could increase the risk of global stagflation on the back of logistic and production problems.

"The NBU continues to assess the balance of risks for its baseline scenario of inflation and the key policy rate as having tilted to the upside.

"With a view to offsetting the impact of several pro-inflationary factors that have materialised since the last monetary policy meeting and that could prevent inflation from decelerating to its target, the NBU Board decided to raise the key policy rate to 9% per annum.”

Hungary’s jobless rate inches down to 3.5% in May
1 day ago
Polish retail sales growth eases to 8.2% y/y in May
2 days ago
Ruble rises to seven-year high, best performing currency in the world
3 days ago
Polish PPI inflation accelerates to 24.7% y/y in May
3 days ago
Bulgaria posts highest inflation in SEE amongst EU peers
4 days ago