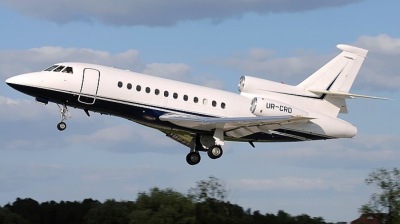 Ukraine's richest people are reportedly fleeing the country as the talk of war reaches a crescendo / wiki
By Cameron Jones in Kyiv February 14, 2022

Ukraine’s richest men are fleeing the country with their families as the number of private jet charters jump after the possibility of war spiked in recent days, according to flight traffic information posted on social media on February 13.

Michael Bociurkiw, an analyst at the Atlantic Council, tweeted on February 13 that, "Ukrainian oligarchs and business folks were leaving Ukraine on charter flights, with about 20 charters and private jets departing from Kyiv on Sunday alone."

He linked an article from Ukrainska Pravda to the tweet, which used the website Flightradar24 as their source for citing the 20 chartered flights.

Switzerland, Austria and the south of France were the most popular destinations for the charter flights.

Ukrainska Pravda stated that such an exodus on charter flights hasn’t been witnessed in six years of observations. The publication reported that planes belonging the country’s top oligarchs, including Rinat Akhmetov, Viktor Pinchuk, and Boris Kolesnikov, as having left the country. A private plane for 50 people was also ordered by Igor Abramovich, another top business figure.

Some, such as Vasiliy Khmelnitskiy, founder of holding company UFuture, announced they have left for business reasons only, with Khmelnitskiy adding that his children remain in Ukraine. Kolesnikov also stated that he himself was in Kyiv and would remain in the city this week. Rinat Akhmetov has been out of the country since January 30, leaving for Zurich on business.

The mood on the streets of Kyiv and Kharkiv remains calm but public concerns on the looming war was fuelled after it was announced that flight insurance will no longer be issued to airlines transiting Ukraine from February 14. All commercial air traffic through Ukraine may be halted as a result.

The government pledged $590mn guarantee to cover premiums over the weekend to keep the airlines running, the Kyiv Independent reports. Richer Ukrainians were simply hiring their own planes to leave.

The coming week will see major Russian military exercises ongoing in Belarus and Russian naval drills in the Black and Azov Seas. Fears of a war soared after a briefing by White House national-security adviser Jake Sullivan on February 12, who said that an invasion of Ukraine could happen “any day.”

Many have speculated that these drills are in fact cover for an invasion of Ukraine by Russia and Belarus. Russia denies it will attack Ukraine and has accused the West of hysteria.

But many of the well off are making prudential preparations. bne IntelliNews sources confirm that two residential English tutors, both British citizens, working for an MP and a businessman respectively, will leave for the south of France this week. Neither confirmed that the flights had anything to do with increased fears over an invasion, as both families travel regularly with their staff for work holidays. Even last month, when the war drums began to beat more loudly for the first time, tutors and teachers working at private schools in Kyiv reported a large number of children absent, away on holidays.

EU leaders sought to reassure the Western Balkans countries that their future is inside the bloc at Tirana summit.