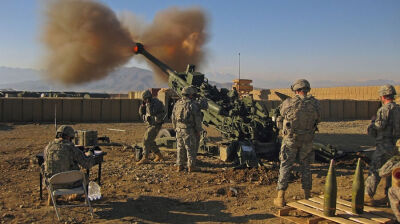 Ukrainian internet users polled by global data collection and trend-tracking company RIWI expect military tensions with Russia to intensify in the coming weeks. Anticipations of increased fighting spiked in late May and early June, correctly predicting the resumption of Russian airstrikes on Kyiv on June 5. 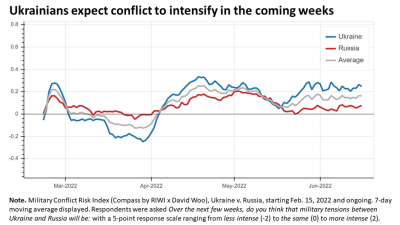 Widespread assumptions of a short-lived war and Ukrainian collapse were checked when Ukrainian forces repelled an attack on Kyiv after Russian soldiers were ordered into Ukraine in late February. Expectations of increased conflict stabilised again in the first half of May, when the last defenders of Mariupol surrendered and Ukraine launched its counter-offensive in Kharkiv.

But anticipation of heavier fighting surged again in late May, and has stayed high throughout June.

The leaders of Germany, France, Italy, and Romania visited Kyiv on June 16 to reiterate their support for Ukraine’s “sovereignty and territorial integrity”. All four premiers agreed to support Ukraine’s bid to become a candidate for EU membership, and pledged to continue to support Ukraine “from a financial point of view.”

This was followed by a trip to Kyiv by UK Prime Minister Boris Johnson on June 17. He vowed that Ukraine’s “unbreakable resolve will long outlive the vain ambitions of President Putin”. Johnson also revealed that he had offered Ukrainian President Volodymyr Zelensky a “major new military training programme” backed by the UK.

The data, which are taken from RIWI’s Military Conflict Risk Index also show that Russians anticipate an intensification in the fighting, although Russian internet users anticipate the escalation to be less intense than their Ukrainian counterparts.

RIWI’s Military Conflict Risk Index, developed in collaboration with macroeconomist David Woo, draws on a unique technology which minimises biases associated with typical survey methods. Random Domain Intercept Technology (RDIT) intercepts web users who land on a dormant domain temporarily being managed by RIWI and presents them with a survey. The fact that any web user has a random chance of exposure to these questions means that the survey reaches those who are not ordinarily included in opinion polls. Unlike typical opinion polls, the RIWI survey does not collect identifiable information like email addresses and names, encouraging individuals to respond honestly.

EXPLAINER: how a price cap on Russian oil might work
Kazakhstan: Sanctions likely behind fresh delay at new Baikonur launchpad
Europe’s gas storage on track to meet 80% full by start of heating season

Serbia demonstrated resilience during the COVID-19 pandemic but the IMF has now cut its GDP growth forecast to 3.5% for 2022.

Europe’s gas storage on track to meet 80% full by start of heating season
5 hours ago
Kosovo’s population dropped to 1.77mn in 2021 as emigration outweighed natural increase
16 hours ago
North Macedonia’s PPI jumps 21.7% y/y in May
21 hours ago
IMF says war in Ukraine, inflation and energy crisis pose challenges to Serbia’s economy
1 day ago
Poland’s unemployment rate falls to lowest point since 1990
2 days ago