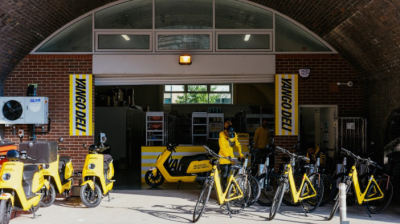 With consolidation in full swing in the competitive foodtech segment, the ultrafast grocery delivery company will wind down its pilot in Paris, but the fate of its London unit remains unclear. / Image: Yango Deli.
By Theo Normanton March 31, 2022

Ultrafast e-grocery delivery service Yango Deli is deciding what’s next in Western Europe, as its parent company Yandex reviews its strategic priorities outside Russia. Yango Deli plans to wind down operations in France, whereas prospects for its more successful UK arm look brighter, according to a source familiar with the matter.

Yango Deli is one of a number of foodtech companies offering to get grocery deliveries from a network of dark stores to customers’ doorsteps in a matter of minutes. Backed by NASDAQ-listed tech giant Yandex, Yango Deli launched in London in October with four fulfilment centres across the city, later adding a fifth.

Yandex, created in Russia more than two decades ago, owns one of the world’s most popular search engines. Neither Yandex, registered in the Netherlands, nor any of its subsidiaries have been targeted by US, UK or EU sanctions, which have hobbled Russia's ability to participate in global financial systems and supply chains.

bne IntelliNews has learned that Yango Deli’s Paris unit will suspend operations after the project fell short of expectations. “Yango Deli is gradually suspending its ultra-fast grocery delivery operations in Paris. This was a pilot project with a small number of dark stores, and it has underperformed our internal targets,” said a spokesperson for the company.

Discussions about suspending the Paris business because of underperformance started in early February, a person familiar with the matter told bne Intellinews. The London market, in contrast, proved more fertile for Yango Deli.

“The ultrafast delivery market in London is highly competitive and we see a considerable amount of interest in our business there, including from peers,” a spokesperson for the company said. “However, we can't provide any further details on this at the moment."

Yango Deli was able to achieve solid results in London, including lot of repeat customers, good shopping frequency and robust spending per customer.

Customer retention in London is 40%, which is approximately 1.5 times higher than the market average, according to Yango Deli's estimates. This is a particularly important metric in the competitive field of ultrafast groceries. Order frequency is also high, with the average active user making 4.2 orders per month (which is around twice the market average).

In addition to its own dark stores, Yango Deli London operates “dark kitchens”, meaning that it can produce its own hot food. As such, its ultra-fast delivery offering includes hot food alongside groceries and other supermarket staples. Dark kitchens account for around 13% of Yango Deli's monthly gross merchandise value (GMV) in London, according to the company.

Business Insider: Western tech majors have tested or used controversial Russian face recognition technology
4 days ago
From 4G to 6G: How Russia seeks to develop mobile networks amid shortages of domestic frequency and foreign equipment
4 days ago
Should I stay or go for founder of Russian internet major Yandex
8 days ago
EVs in Uzbekistan bring problems and prospects
11 days ago
Poland-based Deepflare bags €1.5mn to fast-track mRNA vaccine development with AI
13 days ago