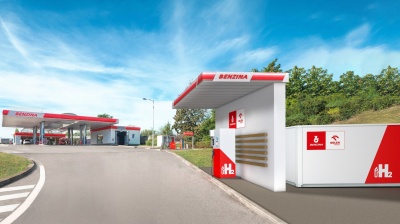 Unipetrol Group, the Czech refining and petrochemical holding owned by Poland's state-controlled PKN Orlen group, will open the first three public hydrogen refuelling stations for transport in Czechia following its signing of an agreement with Bonett Group, the company announced in a press release on September 22.

Bonett will build the three stands at existing Benzina filling stations, which are part of the Unipetrol holding. This year, construction is set to start in Prague - Barrandov and Litvinov, and is scheduled for completion next year with roll-out in 2021. The third installation is planned in Brno in the second phase.

At the same time, works on another two hydrogen dispensers at Benzina’s stations in Pilsen and in Prague on the D10 towards Mlada Boleslav have advanced, the group stated.

“I am pleased that after the challenging process of preparations and many paper works, we can finally start building the first three hydrogen refuelling stations in the Czech Republic. Bonett won the subsequent tender procedure for the implementation of the structure, which has also been approved by the Czech Ministry of Transport,” said chairman of the board of directors of the Unipetrol Group Tomasz Wiatrak, adding that Unipetrol is currently working on launching a tender procedure for the supplier of two more projects in Plzen and Prague.

“Our bid for hydrogen stations has been evaluated as the best one, and we appreciate the fact that Bonett will supply the first hydrogen stations not only in the country but also in the region. It will also be a general contractor for a breakthrough transport project,” commented member of the board of directors of the Bonett Group Vaclav Holovcak.

“We would like to follow up this project with other hydrogen activities and implementations not only in the Czech Republic but also in Poland and Slovakia where our group is actively present, too,” he added.

As reported earlier in August, the sales of the whole petrochemical holding Unipetrol fell by more than 50% year-on-year to CZK15bn (€570mn) in 2Q20, affected by low margins in the refinery and petrochemical industry, the turnaround at the chemical plant in Zaluzi u Litvinova, and restrictions related to measures taken against the spread of the coronavirus.

Unipetrol’s chain Benzina increased its sales by 6.6% y/y to CZK30bn in 2019, tax included. Operating profit of the company also grew by 16% last year compared to 2018 and hit a record CZK2bn. Benzina operates the largest chain of petrol stations in the Czech Republic with 417 pumps.

Serbia delays launch of Turkish Stream section until May 2021

Serbia has delayed the launch of its section of Turkish Stream until May 2021 due to the slower than expected construction of a compressor, Russian news outlet Kommersant reported on November ... more

Russian oil company Lukoil wants to sell its 87.8% stake in the EX-3-Trident perimeter in Romania's Black Sea offshore area, according to the CEO of Romanian state-owned gas producer Romgaz, which ... more