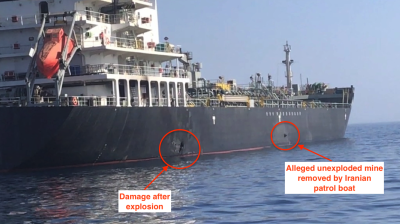 Photograph released by US Navy in June as Washington tried to make case that evidence shows Iran was behind limpet mine attacks on tankers, including the MV Kokuka Courageous (pictured).
By bne IntelliNews August 21, 2019

Iranian Foreign Minister Mohammad Javad Zarif warned on August 21 that Tehran may act “unpredictably” in response to the “unpredictable” policies of the US under President Donald Trump.

Iran describes the biting sanctions regime the US has applied to the Islamic Republic as “economic war” and “economic terrorism”. Determined to diminish Tehran’s role in Middle East affairs, the Trump administration has set out to strangle the Iranian economy to force Iran to the table to make concessions on its nuclear and ballistic missile development programmes and on the support it provides various militia across the region that pose a threat to Israel and Arab nation allies of the US.

The key plank of the sanctions programme is the bid to force Iranian oil exports down to zero. Since that attempt began in earnest in May, there have been limpet mine attacks that have disabled oil tankers in the Sea of Oman and the seizure in July of the UK-flagged Stena Impero off the Iranian coast. The US has said it is confident Iran was behind the attacks, but Tehran has denied involvement. However, the attacks and the tanker seizure have prompted the US to assemble a maritime security force that will be charged with escorting tankers through waters including the Strait of Hormuz, a chokepoint through which around 20% of the world’s shipped oil passes. The UK has said it will join the force and on August 21 Australia said it too would send military assets to back the mission, including a P-8A Poseidon surveillance plane for one month before the end of 2019 and a frigate that would be deployed for six months from January. Bahrain is another country that has said it will back the maritime force. Germany has declined an invitation to take part, saying policy on Iran should be focused on more diplomacy.

Sounded warnings
Iran has previously sounded warnings that if its oil exports are cut by US sanctions towards zero, it could move to block the Strait of Hormuz to all energy shipments from the Middle East. And on August 21 Iranian President Hassan Rouhani said that if Iran’s oil exports were cut to nil, international waterways would not enjoy the same security as before. He spoke after a meeting with Supreme Leader Ayatollah Ali Khamenei, according to Khamenei’s official website.

“World powers know that in the case that oil is completely sanctioned and Iran’s oil exports are brought down to zero, international waterways can’t have the same security as before,” Rouhani said. “So unilateral pressure against Iran can’t be to their advantage and won’t guarantee their security in the region and the world.”

In his speech at SIPRI, Zarif added: “Gulf Arabs cannot achieve security [in the region] by spending billions of dollars on purchasing Western weapons... No amount of foreign military presence can prevent insecurity.”

Gulf Arab states should not seek to “buy security from outside”, said Zarif, while denouncing the sending of naval forces to the Gulf.

“You cannot have an island of security by your fleet in the Persian Gulf when the United States is waging an economic war against Iran,” Zarif concluded.