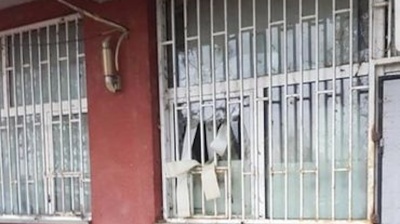 Damage from one of the explosions in northern Kosovo on December 6. / Kosovo Police
By Valentina Dimitrievska in Skopje December 7, 2022

US ambassador to Kosovo Jeffrey Hovenier warned on December 7 that conditions are not in place for extraordinary local elections to be held in ethnically divided northern Kosovo later this month.

The elections are being held to replace ethnic Serbs, who make up the majority of the population in northern Kosovo, who walked out of state institutions in November in protest against controversial new rules on car number plates. The number plate dispute sparked protests, and EU foreign policy chief Josep Borrell warned of the risk of a new conflict in the region. While the immediate crisis was averted, the situation in the region remains tense.

On December 6, several explosions were heard in northern Kosovo. The attacks took place after the arrival of members of the municipal election commission and police to the municipality building in Zubin Potok in order to prepare for the extraordinary local elections.

Hovenier condemned those who used violence during the incidents the day before in northern Kosovo, and expressed concerns about the upcoming local elections in Serb majority towns.

“The US condemns those who employed violence during yesterday’s incidents in northern Kosovo. Resorting to violence and intimidation, including use of an explosive device, and endangering lives is never an appropriate method of protest, under any circumstances,” Hovenier said in a tweet.

He added that US is concerned that conditions are not in place at this time for elections to be held later this month.

“The safety and security of all Kosovan citizens should be the highest priority. We look for all involved to exercise restraint,” he said.

Extraordinary local elections are scheduled to be held in four Serbian municipalities in Kosovo on December 18 after ethnic Serb mayors, together with other Serb officials and members of the police, resigned in protest against Pristina's decision to replace Serbian car number plates with Kosovan ones.

Kosovan government spokesman Perparim Kryeziu said on December 7 that the security authorities are waiting for an assessment of the situation in the north for the next steps regarding the extraordinary local elections due on December 18.

Krieziu pointed out that holding elections is a "constitutional obligation" of Pristina and that the readiness to ensure the conditions for their success has been demonstrated.