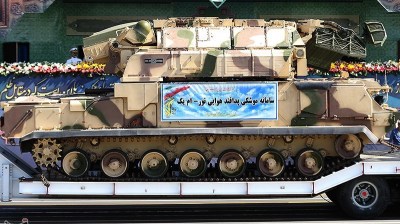 It is known that Iran's anti-aircraft defences include Russian-made, Soviet-era Tor missile systems, known to Nato as Gauntlet systems.
By bne IntelliNews January 9, 2020

US officials have reportedly made it clear to American media outlets that they are confident Iran mistakenly shot down Ukraine International Airlines (UIA) flight PS752 to Kyiv shortly after it departed Tehran on January 8—and at a point in time when Iranian defence systems would have still been on high alert following the Islamic Republic’s missile attack on military bases in Iraq used by US forces.

Following the American media reports, Canadian PM Justin Trudeau, speaking at a quickly convened press conference, said that the evidence did suggest an Iranian missile brought down the passenger plane, possibly in error. He said 138 of the passengers were en route to Canada via Kyiv. “We have intelligence, including from our allies and own intelligence that the plane was shot down by Iranian surface to air missiles,” Trudeau said. “Canadians want answers. That means transparency, accountability and justice.”

CBS reported US intelligence sources as saying they believed the UIA Boeing 737-800 was hit by a missile. A satellite detected the infrared "blips" of two missile launches, followed by another blip of an explosion, they were quoted as stating. Sources that spoke to CBS also said US intelligence picked up the signals of a radar being switched on. None of the 176 people on board the flight stood a chance of survival as the plane came down in a fireball, crashing into farmland on the outskirts of Tehran.

Prior to the US media reports, Ukraine said it was weighing up whether a missile strike could have brought down the aircraft, but Iran ruled out the possibility. Tehran has said that it will not hand over the recovered black box flight recorders to Boeing, the plane's manufacturer, or to the US. Under global aviation rules, Iran has the right to lead the investigation into the incident, but manufacturers are typically invited to bring in their expertise to assist. However, relations between the Americans and Iranians have been stretched to breaking point by the Donald Trump-ordered January 3 drone strike assassination of the de facto head of Iran’s military, Major-General Qasem Soleimani.

Quizzed on what he believed happened to flight PS752, Trump told reporters: "I have my suspicions. It's a tragic thing when I see that, it's a tragic thing. But somebody could have made a mistake on the other side. Some people say it was mechanical. I personally, I don't think that's even a question, personally. So we'll see what happens. Something very terrible happened. Very devastating.”

The US has experience of apologising for mistakenly shooting down an airliner given that in 1988 an American warship fired on Iranian flight IR655 in the Persian Gulf, killing 290 people.

Earlier on January 9, Oleksiy Danylov, secretary of Ukraine's security and defence council, in a Facebook post outlined four main possible crash causes, namely an anti-aircraft missile strike that specifically used a Tor missile (taking into account reports on social media of missile fragments from a Soviet-era Tor system—known to Nato as an SA-15/Gauntlet system—being found near the crash site); a mid-air collision with a drone or another flying object; engine destruction/explosion due to technical reasons and an explosion caused by a terror attack inside the plane.

Danylov said Ukrainian investigators were already in Iran. They wanted to search for possible debris from a missile at the site of the crash, he added.

Danylov also pointed out that the investigation would benefit from the input of experts who worked on the investigation into the July 2014 Malaysia Airlines Flight 17 (MH17) tragedy. In that incident, an Amsterdam to Kuala Lumpur flight was shot down over the east of Ukraine. Dutch investigators concluded it was downed with a Buk surface-to-air missile brought from Russia that was launched from pro-Russian separatist-controlled territory.

Iran's Civil Aviation Organisation (CAOI) chief Ali Abedzadeh rejected the conclusions drawn by western intelligence assessments. “Scientifically, it is impossible that a missile hit the Ukrainian plane, and such rumours are illogical,” he told state-run media.

Abedzadeh said that before crashing the plane turned right to head back to Imam Khomeini airport following a problem. The pilots did not make any distress calls before trying to return to the airport, he added.

"Several domestic and foreign flights were flying in Iranian space at the same altitude of 8,000ft [2,400m]. The issue of the missile's impact on the aircraft cannot be true in any way," Abedzadeh added.

He said that initial findings on what happened had been sent to Ukraine and the US, where Boeing has its headquarters.

Hassan Rezaeifar, head of the committee that oversees aviation accidents in Iran, told the state-run Islamic Republic News Agency that a special meeting was called to assess the possibility that the plane was shot down, but dismissed the scenario. “As the pilot of the Ukrainian plane was trying to get back to the airport, the scenario of a missile attack… is off the table,” he said. “This has been discussed in a special session and went off the table.”

He added that investigators rejected the veracity of the images circulating on social media that allegedly showed missile debris. “No parts of a missile were found at the scene of the crash,” he said.

If the Iranians exclude an US involvement in probing the crash, a third country may have to be brought in to, for example, independently analyse the flight recorders.

Ukrainian President Volodymyr Zelensky said on January 9—declared a day of mourning in Ukraine—that "a thorough and independent investigation will be conducted in accordance with international law." He added that he would speak to Iranian leaders to accelerate co-operation in investigating the crash.

Ukraine's Tehran embassy initially put out a statement blaming engine failure for the crash but later deleted the statement, adding that any comment regarding the cause of the accident prior to a commission's inquiry was not official.

Iran's head of emergency operations said 147 of the victims were Iranian. That would indicate that 65 of the foreign nationals aboard had dual nationalities. Among the victims as listed by Ukraine were 82 Iranians, 63 Canadians, 11 Ukrainians including all nine crew, 10 Swedes, four Afghans, three Britons and three Germans (although Germany said it had no knowledge of any German victims). Fifteen of the dead were children.

UIA is a subsidiary of Austrian Airlines. It is not a low-cost carrier but is known for offering cheap air tickets.