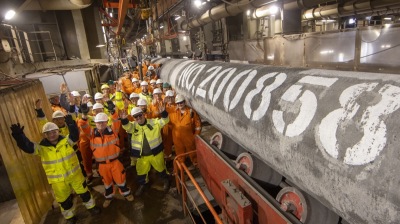 US lawmakers are hoping to kill off Russia's new Nord Steam 2 pipeline in an effort to support Ukraine as well as to increase sales of US LNG to Europe. / wiki
By bne IntelliNews September 16, 2021

US lawmakers made a last ditch effort on September 14 to kill off Russia’s recently completed Nord Stream 2 gas pipeline, which is now completed but not yet in operation.

Blocking the pipeline that will bypass Ukraine and damage US sales of LNG to the European market is one of the few issues that unite both sides of the house. However, attempts to sanction the pipeline to death have failed after US President Joe Biden gave the pipeline a waiver in May this year, admitting it was a fait accompli.

That has not stopped energy sector lobbyists from trying to stop the pipeline from going into operation. A group of lawmakers from both sides of the aisle introduced an amendment led by Representatives Republican Michael McCaul and Democrat Marcy Kaptur and about eight other lawmakers that orders the president to impose sanctions on any entity responsible for the planning, construction, or operation of the Nord Stream 2 pipeline, RFE/RL reports.

It also authorises new mandatory sanctions to foreign entities and individuals responsible for the planning, construction and operation of Nord Stream 2.

The pipeline was finished but it is now standing idle as the final tests and inspections are carried out. It must also gain EU permits before it can go into operation. Under the EU third package energy regulations, in theory the Russian gas company Gazprom will have to share at least half of the pipeline’s capacity, as the EU rules forbid it being both the owner and the operator of the pipeline. The sister pipeline Nord Stream 1 has a waiver that allows Gazprom to completely fill that pipeline with gas, but Gazprom has so far been unable to gain a waiver for the second pipeline.

Russia may dodge the rules by allowing Russian oil major Rosneft to export gas via Nord Stream 2, thus breaking Gazprom’s export monopoly that the company has jealously guarded for decades.

The Russian Ministry of Energy will report to the government on potentially allowing state oil giant Rosneft access to gas exports "in the coming days", according to Interfax quoting Vice-Prime Minister Alexander Novak, who curates the energy sector, on September 15.

Gazprom has said that it hopes the pipeline can go into operation on October 1, but the EU certification process could take several months and may not be completed until January, according to some reports.

In the meantime, shortages of gas and low storage levels just ahead of the heating season that starts in October have driven up prices to record levels over $900 per thousand cubic metres this week. Some pundits have speculated Russia is causing the shortages by refusing to transit gas via Ukraine; however, Gazprom has stuck to the terms of its new transit deal signed at the last minute in December 2019 that commits the Russian gas giant to send 40bn cubic metres via Ukraine’s Druzhba pipeline until 2024.

The Biden administration agreed to waive sanctions on the pipeline in a deal with Germany that has backed the pipeline and which will improve the latter's own energy security by not routing its gas supplies via a warzone and will supply significantly cheaper gas, as the direct connection between the two countries means transit fees will be less than routing it via Germany.

The amendment sponsored by McCaul and Kaptur was submitted to defence funding legislation under consideration by the House Rules Committee.

The legislation, known as the National Defence Authorization Act (NDAA), has been used the past two years to impose sanctions on Nord Stream 2, delaying its completion by more than a year, RFE/RL reports.

The Rules Committee has a meeting scheduled for September 20 to decide whether to include the Nord Stream 2 amendment in the NDAA. Lawmakers have the option to defer to the House Foreign Affairs Committee, as it did last year when similar legislation was proposed.