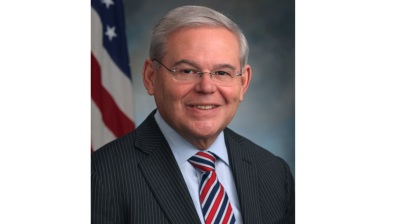 US Senate Foreign Relations Chairman Bob Menendez has introduced possible harsh new sanctions on Russia in an amendment to a defence spending bill, should Russia "escalate" with Ukraine.
By bne IntelliNews November 22, 2021

With geopolitical tensions rising to their highest level since April on reports of a Russian troop build-up near Ukraine, US Senate Foreign Relations Chairman Bob Menendez has introduced an amendment to the draft National Defense Authorization Act (NDAA) bill that would bring down a “cascade” of harsh sanctions in Russia, should it attack Ukraine.

The current crisis began when the US government warned in remarks reported by the Washington Post on October 30 that Russia was building up troops on Ukraine’s border on October 30. US Secretary of State Antony Blinken repeated the warnings on November 22 and speculated that an attack might come in January or February.

The build-up follows the earlier concentration in April in the run-up to the first one-on-one summit between US President Joe Biden and Russian President Vladimir Putin in Geneva on June 16. The two presidents are due to meet again “before the end of the year”, according to statements last week from the Kremlin.

As bne IntelliNews has reported, the chances of a Russian invasion of Ukraine remain low, and the Kremlin has accused the West of scaremongering. But the reports have also unleashed a storm of speculation that have increased tensions dramatically in the last few weeks.

The recent rally on the dollar-denominated Russia Trading System (RTS) has halted after reaching decade-long highs, and led to a mild sell-off in the last week. Likewise, the ruble has fallen against the dollar, dropping by about RUB3 to RUB74.8 as of September 22 after briefly touching RUB70 to the dollar, its strongest level in two years.

Part of the reason for the impact on stocks and the currency is that sanctions talk is back, which is what investors fear the most. Menendez’s bill would impose extremely harsh new measures, but would only be implemented if two conditions are met: a US government designation that the Russian government has launched an "escalation" against Ukraine and the approval of the US president. The new sanctions would thus not be mandatory or automatic.

The market-relevant sanctions in the Menendez bill include:

Financial sanctions (e.g. being cut off from the US dollar and US financial system, asset freezes) against a minimum of three of the six listed Russian state-owned financial institutions and investment funds, as well as ongoing investigations to expand the list.

A ban on US persons and entities purchasing or transacting on both the primary and secondary markets future issues of Russian sovereign debt.

Financial sanctions against persons and entities that engage in transactions in public debt of not less than 10 entities owned or controlled by the Russian government.

Expanded sanctions against persons or entities involved with Nord Stream 2.

Investigations and potential sanctions against a long list of Russian citizens that may be tied to the political and business activities mentioned above.

The Senate is expected to vote on amendments and a final text of its version of the NDAA soon, possibly as soon as next week, Sberbank CIB said in a note.

The alternative version from the House of Representatives also contains several texts relevant to the Russian market, including a rule to ban US investors from the secondary market for future issues of Russian sovereign bonds, a rule to force the US president to impose harsh financial sanctions against more entities related to Nord Stream 2, and a mandatory government review of Russian "oligarchs" and whether they should face personal sanctions tied to human rights and other matters.

“Eventually, both chambers of Congress must pass a version of the NDAA, then it will be revised in a reconciliation process before facing another approval process from both chambers and then being presented to the president for signature. In past years, Russia-related provisions have usually been cut from the final version, though a sanctions programme on parties related to NS2 was passed in last year's bill. The annual bill has to be passed to continue funding for the US military – last year's was signed by then President Donald Trump at the beginning of January 2021, while Congress has a less than formal deadline to finish the final version for every year in the preceding November,” Sberbank CIB said.

“It is not clear at this stage whether the Senate and House leadership or the Biden administration will support Menendez's initiative. Presidents, regardless of party, have traditionally not supported mandatory sanctions, as they limit the foreign policy options available. The sanctions Menendez has proposed would not be automatic and would instead be imposed at the discretion of the president. However, the administration may expect that passage of the Menendez amendment would lead to demands from Congress that the punitive measures be used, and thus be contrary to the goals of the administration. Moreover, though we are not lawyers, it is worth noting that most or all of the powers listed in the amendment are already available to the US president under other legal frameworks,” Sberbank CIB added.