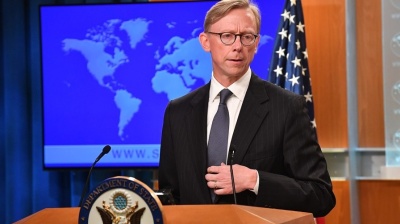 Hook's off to the private sector.
By bne IntelIiNews August 6, 2020

Hook's departure is something of a surprise to Iran watchers, given that there is a critical juncture next week with Washington bidding to extend a UN arms embargo on the Islamic Republic that expires in October. As things stand, it looks like Russia and China plan to veto the move at the UN Security Council.

"We’re going to continue to make the case for this,” Reuters reported Hook as telling reporters on the morning of August 6, hours before his departure was announced. “We hope that the council can find a way,” he added.

It was not immediately clear when Hook's tenure would formally end.

Pompeo did not give a reason for Hook's decision to leave but wrote in a tweet that Hook was moving on to the private sector. He praised him as a "trusted adviser and a good friend" who has achieved "historic results" in countering Tehran and securing the release of US citizens detained by Iran.

Hook, 52, was appointed to the top Iran role at the US State Department in late 2018. He has been unrelenting in applying Washington's intensifying pressure campaign to Tehran and has come under fire from critics for moving forward with what they see as indiscriminate sanctions that hurt ordinary Iranians but fail to bring the Iranian leadership to the table to address what the US, allied with Iran’s regional arch-rival Saudi Arabia and Israel, claims is the malign influence of Iran in Middle East hotspots.

Abrams, 72, a Republican foreign policy veteran, was named US Special Representative for Venezuela in January last year. He has spearheaded a hardline approach aimed at ousting Venezuelan President Nicolas Maduro, who has lately formed a strategic partnership with Iran, which has included badly needed gasoline deliveries from the latter to Venezuela. The move has drawn US ire, adding to President Donald Trump’s frustrations that he has not managed to dislodge either Maduro or achieve his goals with Iran.

Anxiety is growing in Iraq that the US could shut its Baghdad embassy, opening the way for military action in the country against Iran-aligned militias. Washington has made preparations to ... more