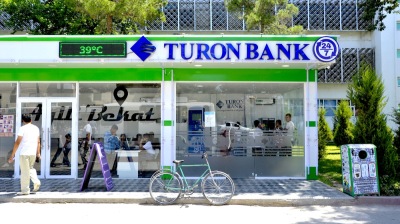 Uzbek banks will attract the first round of foreign investment when restrictions on owning their stock are lifted.
By Ben Aris in Tashkent September 4, 2019

Uzbekistan is opening up to the world and investors, if not investment, beating a path to this promising country with the stamp of the legendary Silk Road. The Uzbeks may be famous for their succulent fruit and veg, but the tastiest of the low-hanging fruit which investors are hungrily eying is seen in the banking sector.

As with any post-Soviet economy, most of the biggest and richest companies belong to the government. But Shavkat Mirziyoyev, the reform-minded president who took the helm in late 2016, says he plans to sell off all the state-owned companies with a few strategic exceptions in the metal and energy sectors, as well as three-quarters of the banking sector.

Most of these companies will be sold via the Tashkent Stock Exchange (TSE), however, the best companies will be reserved for IPOs and within two to three years the bluest of the blue chips could be listed on one of the international exchanges.

“Uzbekistan is open for business and it’s on the international investor’s radar. For the last 25 years they didn't know the name of the country,” said Karen Srapionov, a partner at Avesta Group in Tashkent. “Now there are changes everywhere.”

Banking on reform
Foreign investors love banks. They are one of the easiest ways to get some exposure to the rising incomes and consumer spending that comes in the early stages when a previously closed market opens up. In the fast-growth stage margins are fat early on and the pool of customers is deep and wide.

On the flip-side, governments are nervous about selling off a strategic sector that is also a useful tool in economic management. In the 1990s, the small countries of Central Europe decided to sell off their banking sectors. They were largely taken over by Austrian and Italian banks. Russia, on the other hand, promoted its state-owned banks, which today dominate its banking sector, although it has also welcomed commercial banks for the efficiency-promoting competition they bring.

Uzbekistan is set to follow the Russian model rather than the Central European version for the meantime, simply because it needs the banks to fix its economy.

The government imposed restrictions on the foreign ownership of bank shares to prevent one of its bigger neighbours walking off with the whole sector. With a total equity value of around $25bn, Russian banks, for example, could easily buy the whole Uzbek banking industry. Under the current rules, foreign investors can buy bank shares but only with special permission from the central bank. Only two foreign banks operate in Uzbekistan: one from Turkey and another from Korea. There are no Russian or Chinese banks at all.

That’s about to change. A draft law will be tabled to partially lift the restrictions and allow foreigners to own up to 5% of a bank’s shares without the need to apply for permission, and there is no limit on the number of these 5% stakes that can be sold, provided the investors are unrelated. Local funds and brokers are anticipating a big inflow of investment as currently some 85% of the turnover on the TSE is made up of bank shares. “These are the cheapest bank stocks in the world,” said Scott Osheroff, chief investment officer of Asian Frontier Capital (AFC). The law is due to be voted on by parliament in September or October.

However, the government is going to keep around a quarter of the biggest state-owned banks back for its own use.

The Uzbek government raised $1bn with a debut Eurobond issue in February. While the government is sufficiently well funded thanks to the relatively diversified economy and especially its gold production, it is using this money to invest in the economy. The state has distributed about three-quarters of the Eurobond receipts to a handful of leading state-owned banks.

“The banks are quasi development banks now. Promstroibank is funding manufacturing and industry projects. Asaka bank is financing automotive, the chemical industry and the transport sector. There is a line-up of government mega-projects that will cost billions and billions to complete,” said Sardor Koshnazarovthe managing director of Silk Capital, a fund and brokerage based in Tashkent.

The government has big plans and it is impatient to implement them. The mayor of Termez, a big regional city on the southern border with Afghanistan, told bne IntelliNews that he is getting around 300 emails with orders every week from the president’s office.

“The problem is that we simply don't have the people to implement more than a tiny fraction of them,” the mayor complained. Over and over again in interviews for this article the same problem was voiced: the government has a clear idea of what it wants to do, but the personnel bandwidth is so narrow it is casting around for ways to implement changes. And reaching out to the state-owned banks, which nominally employ some of the few Uzbeks with financial and business nous, is an obvious answer. Press-ganging oligarchs into helping has been another option.

Bank share law
The state owns between 86-87% of the bank sector’s assets, according to Silk Capital.

“In the wake of the 2008 crisis the government was afraid that Russian banks would come into the market and snap up all the Uzbek banks. The restrictions on trading bank shares was designed to protect the sector from Russia and China,” said Koshnazarov.

The state property management agency says that in principle it is willing to sell a controlling stake to a strategic western investor, but none have expressed an interest as yet.

While it would be possible for foreigners to use a mirror scheme to buy bank shares–foreigners are banned from owning bank shares, but not from owning a local company that owns bank shares–none have gone for this option as the risks are too high, said Koshnazarov. Apart from anything else, the director of the local firm would have full control over the voting rights that come with the shares, not the ultimate beneficial owner.

“The draft law that would liberalise the bank sector is ready but it has not been signed yet. But that is due to happen in the coming months,” said Avesta Group’s Srapionov. “When it is passed there will be a rush into the market as the banks are really cheap. We are expecting foreign investors to take a big share. That will drive the index and the daily turnover on the exchange up several-fold.”

COMMENT: Strengthening the foundation of the Uzbek capital markets infrastructure

Ukraine's gas market reforms have been a huge success. By unbundling production and transport, the country has attracted hundreds of traders that compete on a vibrant market that has eliminated corrupt scams and brought prices down.

EXPLAINER: Just how bad are the sanctions on Russia’s ruble-denominated OFZ treasury bonds?

The White House has slapped new sanctions on Russia and targeted the Russian Ministry of Finance ruble-denominated OFZ treasury bills for the first time, the workhorse bond that is used to fund the budget. But what do the sanctions mean in practice?

The share price of Uzbek insurance company Universal Sugurta rose 200,000% in the first two months of this year, only to collapse again in March. It looks like a classic "pump and dump" play, but for the nascent market that's probably a good thing.

Allegro will have to move fast to stem the Amazon flood

US e-commerce giant's push into the booming Polish market will make it much more competitive overnight.

The health minister then drank the concoction at a press conference.

Unbundled: the Gas Transmission System Operator of Ukraine
4 hours ago
EXPLAINER: Just how bad are the sanctions on Russia’s ruble-denominated OFZ treasury bonds?
1 day ago
Uzbekistan's stock market sees its first big "pump & dump" incident
1 day ago
Allegro will have to move fast to stem the Amazon flood
1 day ago
Kyrgyzstan president prescribes poison root for COVID-19
3 days ago