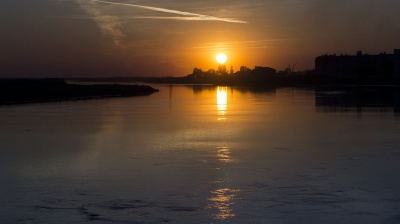 Sokh is located in the Ferghana Valley which is irrigated by the Syr Darya river, historically known as the Jaxartes.
By Eurasianet June 5, 2020

The government in Uzbekistan has pledged dozens of millions of dollars in investments in an exclave rocked by unrest this week, but simultaneously appointed a top policeman as head of the district, signalling concern over potential for more trouble ahead. 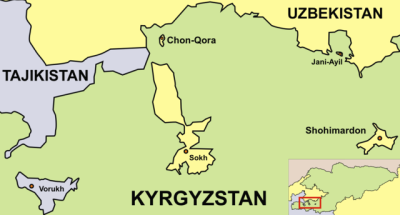 The level of frustration in the exclave, which lies fully within the territory of Kyrgyzstan, was laid bare in videos that circulated via messaging apps on June 3, one of which showed the Ferghana provincial governor Shukhrat Ganiyev struggling to be heard over the angry shouts of Sokh residents. Other footage showed Sokh villagers facing off against shield-wielding riot police.

The extent of injuries incurred during the clashes of May 31, which escalated from a disagreement with Kyrgyz villagers about fair access to a local water spring, accounted for a lot of that anger, but there is also long-standing resentment over a sense of abandonment by officials in Tashkent.

A Ferghana-based journalist told Eurasianet on condition of anonymity that one Uzbek national is understood to have died during the clash.

“Many people in the town know about it, but the authorities do not want this information to become known,” the journalist told Eurasianet.

Seeking to calm moods, Ganiyev promised that young people suspected of involvement in the fighting would not be detained. He then appealed to his listeners to refrain from further conflict. And then, most importantly for the crowd, he reprised promises made by other senior officials to ease access to the Uzbek mainland.

Lack of economic opportunities have been a stubborn feature of life in the exclave, which is inhabited almost entirely by ethnic Tajiks.

Prime Minister Abdulla Aripov, who travelled to Sokh shortly after fighting subsided and was still there on June 3, promised at a meeting with local community representatives that major investment was forthcoming. This year alone, 73 projects worth a total of $28mn, creating jobs for around 4,500 people, will be implemented, he said. Aripov said new multistorey apartment blocks and roads would be built. When he said that homes burned to the ground during fighting would be rebuilt, he was greeted with a round of applause.

The government has further pledged to allocate a quota of 500 places in universities to people from Sokh and to allow students to take entrance exams in their native Tajik.

And this was just for starters. Aripov said the government is looking at restoring an old airfield to ensure a reliable form of access to the rest of the country. About $100mn will be spent on overhauling Sokh, he said.

“Of course, the unpleasant situation that happened a few days ago at the border made us all consider many things and look at a lot of things differently,” Aripov said.

The exclave’s boundary issues have been complicated by geopolitics. Kyrgyzstan is a member of the Eurasian Economic Union (EEU), a Russia-dominated trading bloc. For that reason, the only road linking Sokh to Rishton, the nearest mainland town in Uzbekistan, is securely guarded. This corridor was briefly thrown open last August, but was then within days shut again at the behest of the EEU, which is wary of the unvetted movement of goods and people from non-bloc nations.

Although Aripov pledged earlier this week that the road to Rishton would be opened, it is not clear whether such a breakthrough will come soon, and that could test moods.

Authorities are cognizant of the dangers of tensions continuing to simmer in the immediate future.

On June 3, Saidbahrom Saidmusayev was named head of Sokh district. He had headed the local Interior Ministry department since 2019. He has never previously held a civilian post.