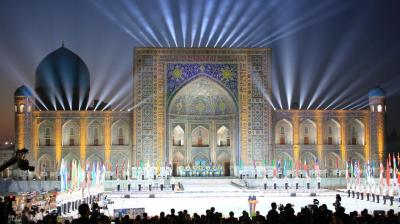 Uzbekistan's Tilya Kori Madrasah. Part of opening up is extending a welcome to more foreign tourists and the Uzbeks have plenty to show off.
By Ben Aris in Berlin October 1, 2019

Uzbekistan is rapidly opening up, having embarked on a path of structural reforms and economic growth that is making headlines around the world. Growth is expected to pick up with the government working itself to exhaustion to create a modern market-driven economy, fuelled by large public investments. But there are a string of challenges to overcome, including high unemployment. The rapid credit expansion, price liberalisation and a sharp devaluation of the local currency, which is raising inflationary pressures, are among other problems, the Institute of International Finance (IIF) noted in a report entitled “Uzbekistan – opening towards the world.”

The government has been working hell for leather to remodel the economy since President Shavkat Mirziyoyev took the reins following the death of the independent republic’s first and only president, Islam Karimov, a leader who was always suspicious of foreign investors.

So far the government has been prudent and it enjoys large currency reserves and a low external debt. But inflation is the main macroeconomic problem that the government needs to contain. Tight monetary policy must be maintained to lower the pace of the ongoing new-era credit expansion as well as to address inflation, according to the IIF.

The government has also targeted sectors with large export potential, especially in the more valuable parts of the production chain. For example, the government plans to ban the export of raw cotton next year to force producers to invest in spinning and textile mills to add processing value to their exports. As such programmes gather momentum, the large current account deficit will narrow gradually. For now, the large official reserves represent a buffer.

Since Mirziyoyev took power and announced he would playing an entirely different ball game to Karimov, the economy has started to respond to his reforms. But GDP growth is not yet matching expansion that ran at an average of 8% a year between 2005-2015 driven by heavy investment in manufacturing, and exports of metals, gas, cotton, and gold.

“[...] growing inefficiencies and weaker demand for Uzbekistan’s exports—due to moderation in growth in China, and sanctions on Russia—led to slower growth in recent years,” the IIF observed.

Growth picked up to 5.1% in 2018, as underperformance in the agriculture sector (30% of GDP) was more than offset by strong performances in mining, manufacturing and construction. With the completion of the first wave of reforms, including exchange rate liberalisation, the easing of trade barriers and price controls, the IIF anticipates that growth will pick up to 5.5% this year and 5.7% in 2020.

“Uzbekistan has ample potential to raise its growth beyond the short-term by improving infrastructure, positioning itself as a regional transit hub, and integrating into regional supply chains,” the IIF said.

But the biggest obstacle to success for Mirziyoyev is high unemployment. Unlike most countries in Europe and the Former Soviet Union (FSU), Uzbekistan enjoys a young and rapidly growing population, but the economy cannot create enough jobs.

“Despite the steady growth, unemployment remains very high, as half of the population are less than 30, leading to rapid growth in the working-age population—an increase of about half a million annually,” the IIF points out.

The upshot is that many young Uzbeks have left the country to look for work abroad, with the majority going to Russia. It received 900,000 new migrant workers from Uzbekistan alone in 2018, according to the Federal Security Service (FSB). While the money these migrant workers send home is a useful source of cash and contributes to keeping the current account deficit in check, Uzbekistan needs to create more domestic jobs to allow these workers to return home.

High inflation is another headache for the government. It is currently running at 14% as the inflationary effects of the sharp currency devaluation that followed the liberalisation of the Uzbekistani som (UZS) in September 2017 are still working their way through the system.

The after-effects of the currency liberalisation are gradually being fed into the system as more controls over the currency are removed. It was only in August that banks were for the first time allowed to offer dollars in ATM machines to the general public. Though, in a step back, Uzbekistan in late September removed the option allowing VISA, MasterCard, UnionPay and other international cardholders to withdraw funds in foreign currency from ATMs.

“With continuous price adjustments and buoyant economic growth, we expect inflation to remain elevated in the near term. Private credit soared in the past two years despite monetary policy tightening. Given the limited effectiveness of the rate hikes, further credit tightening will have to come from restraints in government-directed lending,” the IIF also noted. 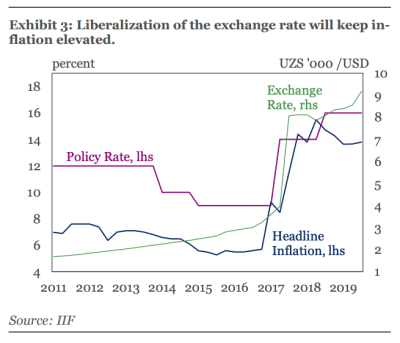 A domestic credit boom and easing of trade restrictions has spurred a surge in imports of capital goods. Such a situation is what caused Karimov to clamp down on the convertibility of the som in the first place back in 1995.

With imports sucked in following the liberalisation, the current account has shifted from a small surplus under the old regime to a swelling deficit that reached 7.1% of GDP in 2018. The IIF foresees the deficit falling slowly as the steps of liberalisation gradually take effect, but it is worried by the ongoing credit boom.

“A sustained credit boom and buoyant domestic demand present challenges,” the IIF said. “Unless restrained, high credit growth can lead to wider current account deficit and the deterioration of the external position over the medium term. Nonetheless, total public foreign assets, half of which are in the form of gold, are at a comfortable level.”

Going forward, it is possible that authorities may use some of their reserve deposits to clean up the balance sheets of local banks, but in the meantime the recent rise in gold prices and a eurobond issue in February mean that the government is well funded and can also keep the overall level of reserves stable.

Karimov may have closed the country to the rest of the world, but the consequences were not all bad as things stand. One consequence is that Mirziyoyev has taken over a country with very little debt.

“The low government debt allows Uzbekistan to proceed with reforms from a strong position. However, announced restructuring of SOEs may create a dent in revenues as a large share of taxes is collected from such enterprises,” said the IIF. 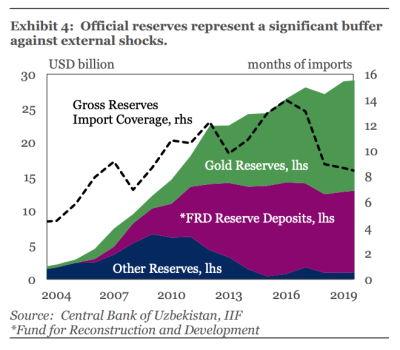 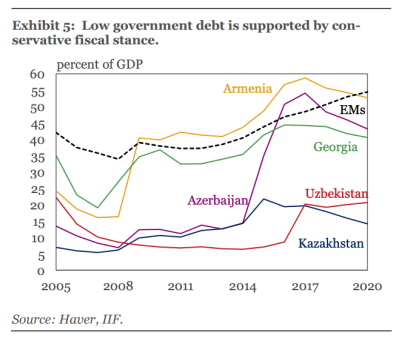 With the move to a more market-based economy, comprehensive tax reform will be needed to avoid the risk of a drastic decrease in tax revenue, the IIF advised.

On the expenditure side, the government will have to strike a balance between meeting large social and investment needs through directional lending and fuelling pro-cyclical fiscal policies, which may destabilise the economy.

Despite low fiscal financing needs, Uzbekistan issued its first international bond in February this year. A string of corporate issues are expected to follow.

Thanks to the solid state of the public finances, the Uzbek sovereign bond has performed very well with yields falling from 5.4% at issuance to 4.3% as of July. The bond currently trades with only a 100bp spread over Georgian sovereigns, and Georgia is much more advanced in terms of pro-market reforms.

The state is suffering from an acute shortage of qualified specialists to carry out reforms and so has turned to the banks as the most competent state-affiliated specialists in the country to implement business plans: of the $1bn raised from the sovereign eurobond in February, three-quarters of the money was distributed to the state-owned banks to onlend to specific projects.

The banking system appears to be sound, according to an IIF assessment. Tier I capital exceeds 14% of risk weighted assets, non-performing loans (NLPs) are low at 1.3% of total loans, and the profitability of the banks is high with ROA at 2% and ROE at 16.2% in 2018.

The authorities have been working steadily to address vulnerabilities in Uzbekistan’s financial sector associated with inadequate governance and oversight. The Central Bank of Uzbekistan, for instance, adopted a new regulation that requires commercial banks to form their required reserves in national currency with the aim of reducing the dollarisation rate in the economy. This rule is also expected to improve the efficiency of market mechanisms for liquidity regulation in the banking system, the IIF said.