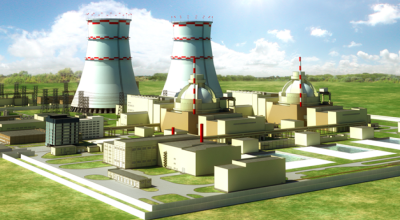 Rosatom has an order book to build nuclear power stations around the world worth at least tens of billions of dollars. / Wiki.
By Muzaffar Ismailov in Tashkent June 13, 2022

"As for the construction of nuclear power plants. Again, we come back to the question of how economically feasible it is. On the one hand, the project is very interesting because it reduces dependence on fossil fuels. Unlike solar and wind generation, it provides fairly high guarantees for stable [electricity] generation. On the other hand, it should be noted that, purely economically, this project is very much losing out to other types of generation," he said.

Uzbekistan side is discussing the possibility of reducing the cost of the plant construction, Khodjaev said.

"In simple terms, how much will the energy produced at this nuclear power plant cost us? Will it be competitive compared to other sources? If not, then the conclusion is obvious. If yes, then this is what we should implement," the official added.

Khodjaev noted that from the very beginning, Rosatom was chosen as the prospective strategic partner for Uzbekistan for this project. A potential site has been identified, but "there are certain nuances", he said.

"They are related to the fact that research shows the necessary amount of investment. That is, what kind of station should be on this site, how it should work, in what mode. Based on this, it is possible to calculate the capital costs for the construction of the station. If we want to reduce the cost of the final electricity generated at this plant, then we must reduce the cost of construction. This is plain," he said.

Uzbekistan continues to work with Rosatom on the issue of cost optimisation, which means that "the cooperation has not stopped", the deputy minister remarked.

Khodjaev noted that there were many parties with the intention to build a nuclear power plant, but, when choosing a partner, they took into account not only the factor of the construction of the plant, but also its operational life of 50-60 years, as well as its decommissioning.

"Uzbekistan, being a country with quite serious problems in logistics—that is, we have certain restrictions on logistics—is obliged to take this factor [of the operational life and decommissioning] into account. There are a lot of people who want to build this kind of plant. But if we look at the 50-60-year perspective, we need to think about how to supply fuel for the plant and how to dispose of the waste," he said.

According to the concept of the development of nuclear energy in Uzbekistan for 2019-2029, the construction start for a nuclear plant is scheduled for 2022. The plant would be built at the expense of the Uzbek state budget as well as with a state credit from Russia.

The project provides for the construction of a nuclear power plant with water-water reactors of the VVER-1200 type with a capacity of 1.2 GWh in the Jizzakh region.

General director of Uzatom, Jurabek Mirzamakhmudov, noted that the first power unit of the plant should be commissioned in December 2028, and the second in June 2030.

In October 2019, Rosatom CEO Alexey Likhachev said that the corporation was planning to sign the main contract for the construction of a nuclear power plant in Uzbekistan by the end of 2019. However, there have been no reports of any such signing so far.

During the one-day visit of President Shavkat Mirziyoyev to Russia in November last year, 18 bilateral documents were signed, including agreements between governments on cooperation in the field of nuclear and biological safety.

At the beginning of November last year, Abdulaziz Kamilov, the former foreign minister of Uzbekistan, said that the issue of building a nuclear power plant in Uzbekistan was being considered both from the point of view of economic feasibility, taking into account the numerous proposals for investments in green energy, and from the point of view of transparency. "We will study the attitude of the public to this issue not only in Uzbekistan, but also in neighbouring countries," he said.

Last year, an International Atomic Energy Agency (IAEA) team of experts concluded a 12-day mission to Uzbekistan to review the development of infrastructure for the country's nuclear power programme. The Integrated Nuclear Infrastructure Review (INIR) was carried out at the invitation of the Uzbek government.

The INIR team said that the country’s nuclear power programme benefitted from strong governmental support and showed a clear commitment to safety, security and non-proliferation.