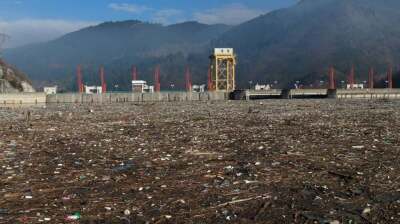 Around 4,000 cubic metres of floating waste has already arrived at the crown of the dam at Visegrad.
By bne IntelliNews January 5, 2021

Tens of thousands of cubic metres of waste are floating down the Drina river and its tributaries in Bosnia & Herzegovina, Montenegro and Serbia, Nedjeljko Perisic, head of Hidroelektrane na Drini, the company operating the hydropower plant located on the Drina, said on January 4.

The three countries have failed for years to upgrade their waste management systems, which has resulted in an accumulation of waste in rivers. Usually plastic bottles, packaging and other debris are held back by huge floating barriers but when these break or are lifted by high waters the rubbish escapes.

Around 4,000 cubic metres of floating waste has already arrived at the crown of the dam at Visegrad after a chain broke, which could endanger the work of Hidroelektrane na Drini, Perisic warned on January 4, according to a report published on the company’s website.

Perisic told reporters that due to the large amount of water that passed through the Drina river in recent days, a barrier that is supposed to hold back the floating waste broke.

“Our workers have managed to repair the problem and ... we now have to remove the waste from the crown,” Perisic noted.

He added that the company is not optimistic because more waste is expected to arrive. "In the upper course of the Drina River, there are tens of thousands of cubic metres of floating waste that comes from the tributaries of the Drina river, starting from Praca, Tara, Piva, and mostly the Lim river," Perisic added.

Perisic noted that Hidroelektrane na Drini extracts up to 8,000 cubic metres of waste every year. According to him, the biggest volume was registered on the Lim river, which flows through all three countries.

Waste is floating down the Praca, Tara and Piva tributaries and, according to Perisic, precipitation would worsen the situation as when  rain or snow causes rivers to rise, they reach improvised landfills on the banks and tonnes of waste get washed into water streams.

Waste is accumulating at the Potpec dam and and 56 MW hydropower plant on the Lim river in Serbia too. Some of it sinks and clogs up the intake, Balkan Green Energy News reported, quoting Predrag Saponjic, director of HE Limske, which runs the hydropower plant.

The problem has persisted for years, despite a trilateral meeting between officials from Bosnia’s Republika Srpska, Serbia and Montenegro more than two years ago. Floating waste is a problem across the Western Balkans due to the lack of waste management and recycling infrastructure. As well as the threat to HPPs, this has a negative impact on the leisure and tourism sectors; Croatian officials, for example, have frequently complained about the high cost of cleaning up waste that finds its way into the Adratic from Albania only to wash up on Croatian beaches.