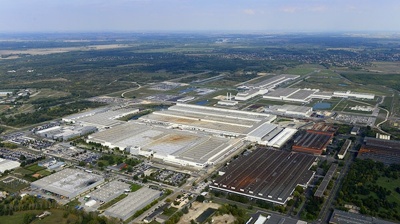 The Audi factory at Gyor, Hungary.
By Tamas Szilagyi in Budapest November 12, 2020

Industrial output in Hungary grew 2.2% y/y in September, rising for the first time since February, while adjusted the data showed a 1%, drop according to detailed figures from the statistics office KSH on November 12.

The sectoral breakdown of activity showed the output of the automotive sector rising by 7.8% y/y in September. The sector, which is a key driver of growth accounting for a third of manufacturing output, had contracted for months after pandemic shutdowns in the spring but managed to post growth from the summer months as demand on European markets picked up.

Output of the computer, electronics and optical equipment segment, which made up 14% of the manufacturing sector, rose 6% on annual basis in September. Output of food, drink and tobacco products companies, accounting for 11% of manufacturing output, edged up 2.1%.

The order stock in manufacturing was up 6.9% at the end of September, while new orders increased by 8.2%. This came after new domestic orders rose 7% and new exports climbed 8.2%.

The industry's strong showing in Q3 bodes well for the quarterly GDP due out on Friday. Hungarian analysts are expecting double-digit growth on a quarterly basis after a record 13.6% y/y decline in Q2. In the previous quarter, the economy shrank 14.6% on a quarterly basis.

On an annual basis, forecasts ranged between a 1.1-5.6% downturn in the July-September period with the median forecast at 5.2%.

Industrial output quickly recovered after the end of the lockdown and output has reached pre-crisis levels, an analyst from UniCredit Bank said.

For the full-year analysts expect the GDP to shrink between 5.4-6.7%. The 6.2% median forecast is in line with the government’s 6-6.5% projection. With the second wave of the pandemic becoming more serious than expected, most economists revised their V-shaped recovery forecasts, and they now see a protracted recovery.