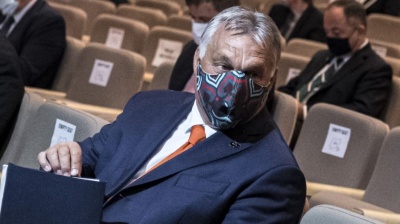 Hungarian PM Viktor Orban says Europe should focus on managing the coronavirus crisis instead of engaging in rule of law debates.
By Tamas Szilagyi in Budapest October 2, 2020

Prime Minister Viktor Orban hinted that Hungary may block approval of the EU's pandemic recovery fund if payouts are linked to rule of law issues. Before leaving for a two-day summit for Brussels on October 1, Orban said bilateral agreements could be an option if the debate over rule of law conditionality prevents the launch of the EU's €750bn Next Generation recovery fund.

EU leaders gathered in Brussels for a two-day summit discussing foreign policy issues such as tensions in the Eastern Mediterranean, the situation in Belarus and the armed conflict in Nagorno-Karabakh.

Talks at the summit are likely to touch on the agreement member states reached in July on the EU’s multiannual financial framework for the 2021-2027 financial cycle and a recovery package to offset the damage wreaked by the coronavirus pandemic, the prime minister said. The deal was still complicated by disagreements as certain member states wanted to tie it to the issue of the rule of law.

The Hungarian government says that Europe should focus on managing the coronavirus crisis for now and the pandemic rescue package should be made available to member states in need of help as quickly as possible. "We shouldn’t slow things down with debates on the rule of law," it said.

Orban expects heated debates on the issue and recommended that member states could make intergovernmental deals bypassing EU institutions to allow fast access of funds for countries that need it the most.

Hungarian opposition parties said the prime minister was just bluffing and by blocking any deal would hurt Hungary as the country is one of the biggest beneficiaries of the next budget. According to conservative estimates, EU funding for Hungary could jump to €52.8bn in 2021-2027 at 2018 prices compared to €39bn during the 2014-2020 EU budget cycle.

The country is set to receive €8bn in grants and €9bn in loans under the NGEU recovery fund. This would be supplemented by €10bn own contribution. Including the latter, Hungary's total funding available during the next EU cycle would be boosted to around €61.5bn, which is 43% of the country's annual GDP.

On Wednesday, the Council adopted its negotiating position on the so-called rule of law conditionality after a compromise text was put forward by Germany, the current EU presidency holder.

The proposed text scrapped all language referring to "generalised deficiencies as regards the rule of law", replacing it with more general references to "breaches of principles" and made it significantly more cumbersome to suspend EU payments.

The Council, with Germany at its helm, will now enter into negotiations with the Parliament, which already said that it will want to see strong links between rule of law and EU spending before signing off on the next seven-year budget.

US pledges up to €1bn for EU's eastern Three Seas region

The billionaires club, where the mega-wealthy go to meet each other
US pledges up to €1bn for EU's eastern Three Seas region
Hungarian foreign minister strikes back at Joe Biden with Ukraine graft allegations

North Macedonia, Albania and Serbia to invite Kosovo to join mini-Schengen on October 30
22 hours ago
First day of Belarus’ general strike off to mixed start
1 day ago
"Very nice!" Kazakhstan adopts Borat's catchphrase in tourism advertising
1 day ago
Ukraine’s ruling Servant of the People Party's honeymoon is over after it loses ground in regional elections to local incumbents
1 day ago
French Orano to join $8bn nuclear power plant expansion project in Romania
1 day ago