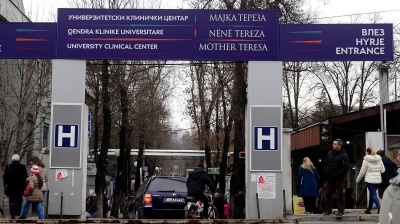 By Valentina Dimitrievska in Skopje September 30, 2019

A doctor from the 8 Septemvri clinic in North Macedonia’s capital Skopje was verbally assaulted by relatives of a 67-year-old man, who died in the hospital one day after he was admitted. The patient was undergoing dialysis and was suffering from several other diseases.

The incident at the state-run hospital on September 27 was the latest in a series of verbal and physical attacks on medical staff by outraged relatives of patients, claiming medical negligence.

Violence against medical personnel in state-run healthcare facilities in North Macedonia has escalated in the last two years and has been particularly frequent lately.

The neglected health system, poor working conditions and the low pay for medical staff — that creates incentives to demand bribes — have caused the quality of care to deteriorate and turned patients against doctors, creating tense situations that are increasingly escalating into violence.

A nationwide warning protest by doctors and nurses took place on September 18, as they urged the authorities to improve white coats’ security. The incident on September 27 also led to an internal protest by the medical personnel from the 8 Septemvri hospital in front of the director’s office.

There were no official comments on the reasons for the verbal assault, but the hospital’s director Hristijan Kostov urged the government and the health ministry to impose stricter security measures to help prevent similar incidents in future.

The attack on the doctor was the third in the last two weeks alone. On September 6, a doctor from the northwestern city of Tetovo was beaten up, ending up undergoing neurosurgery in Skopje.

The Doctor’s Chamber condemned the attack and called on the competent authorities to take concrete measures to prevent such incidents of physical violence.

Health Minister Venko Filipce promised that the ministry will hire security guards from the Professional Security Agency as well as police officers to protect doctors and nurses at the state-run healthcare facilities who are the most frequent targets of abuse.

However the minister admitted that the problem is more complex, and cannot be eliminated only by providing security to doctors.

He thinks that the protest was an expression of dissatisfaction not only with the widespread attacks on doctors, but also with the status of doctors in society.

“They [doctors] are somehow degraded. We are challenged to improve the whole system,” said Filipce.

The patients’ association listed several reasons for their concerns and dissatisfaction including waiting too long to get medical examinations, inaccessibility of health services, and staff shortages in the public sector as many doctors and nurses have left to work in private hospitals where working conditions are much better.

Another of the reasons for attacks on medical staff is that some doctors are demanding bribes. The association of doctors says that corruption in the health sector could be addressed by increasing salaries.

According to Goran Begovic, president of the Clinical Center Syndicate, the number of assaults has tripled from five years ago.

Begovic said during the September 18 protest that the problem with the attacks by patients is inherited from the previous conservative government of VMRO-DPMNE and its “incorrect policies” in the health sector which led to degradation and marginalisation of the medical profession.

This is not unique to North Macedonia, but a problem in numerous countries across the post-socialist space. In the last few years the shortcomings of Romania’s medical care were thrown into the spotlight after the Club Colectiv nightclub fire; many of its victims died of infections contracted in hospital rather than in the fire itself. Last year Bulgaria launched an investigation into “hospital within a hospital” schemes, where illegal contracts had been signed with private hospitals to provide almost rent-free space and equipment, thus draining the resources of state hospitals.

In North Macedonia, 23 patients have filed complaints against doctors in the last two years. So far this year there have been 51 requests for extraordinary expert supervision to investigate the work of certain doctors, compared to 39 a year earlier, according to sources from the Doctors’ Chamber. In the last six years, 213 requests for extraordinary expert supervision have been submitted, of which 100 have been processed.

The requirements for extraordinary expert supervision most often refer to medical malpractice, failure of doctors to send patients to take laboratory or other tests as well as unprofessional treatment.

In addition, patients are also dissatisfied with the efficiency of the authorities in solving their problems.

“You can imagine how it is when you have a sick child and you have to go back and forth from one hospital to another and you still don't know the diagnosis, or you cannot find the needed drugs in pharmacies,” Vesna Aleksoska from the A Life with Challenges patients association was cited as saying by samozdravje.mk.

“We must work on restoring confidence,” the head of the Chamber of Healthcare Professionals Violeta Kotevska said.

The Doctors’ Chamber has launched a series of workshops with associations of both patients and doctors to jointly locate problems and restore trust in each other.