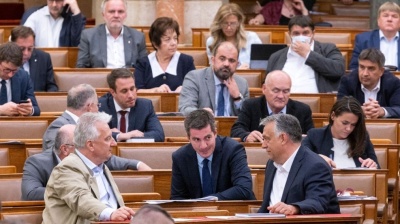 The Hungarian parliament, still working under state-of-emergency rules, approved a number of controversial laws on May 19. An average day at Hungary's parliament saw cultural workers stripped of their public employment status, a ban on people legally changing their gender and the classification of data on Hungary's largest-ever railway reconstruction project.

Lawmakers approved legislation to terminate the status of museum, library, archival, public-culture, theatre and orchestral staff as public employees as of November 1, despite dissent from opposition parties and unions. The government said that the transformation to more flexible labour law regulations will be suitable to "follow the dynamic changes on the labour market", while unions say the decision will mean existential threats to 20,000 employees in the cultural field. Parliament approved a 6% wage hike for the sector but opposition parties warned that two-thirds of them receive the equivalent of the minimum wage.

Lawmakers of the ruling conservative Fidesz party has also approved legislation that makes it impossible for transgender people to legally change their gender.

"The state’s decision to register children’s biological sex in their birth certificates does not affect men’s and women’s right to freely experience and exercise their identities as they wish," the government’s communications office said.

Trans people in Hungary have been effectively unable to change the sex on their identity documents since 2018, according to LGBTI rights advocates, who said there were already multiple court cases underway challenging that.

Organisations are now requesting the law be sent for review to the Constitutional Court.

The decision pushes Hungary back towards the dark ages and tramples the rights of transgender and intersex people, wrote Amnesty International researcher, Krisztina Tamas-Saroy, adding that it will not only expose them to further discrimination but will also deepen an already intolerant and hostile environment faced by the LGBTI community.

The parliament also voted on a bill that transferred ownership of 10% of Richter shares and 10% of MOL shares worth a combined HUF290bn (€819mn) to Mathias Corvinus Collegium (MCC), an interdisciplinary educational institution that seeks to foster talent in Hungary and the Carpathian Basin.

The foundation that operates Hungary's leading economic university Corvinus was also given ownership of the same number of shares in Hungary's top blue chips instead of just fiduciary rights.

Hungarian lawmakers have also voted to put six more universities in Hungary to be run by foundations under the same financing model.

In a recent interview the chairman of Hungary’s leading drugmaker Richter Gedeon voiced concerns about the government’s plans to transfer ownership of Richter shares to foundations. Erik Bogsch fears that the new ownership structure theoretically could make the 119-year drugmaker a potential target of hostile buyout.

The Hungarian state exercised ownership rights over a 25%-plus-one-vote stake in Richer, which until now was enough to block hostile bids.

The Fidesz-led majority has also approved legislation to classify details of the Budapest-Belgrade rail reconstruction, the largest railway investment project in Hungary. The €2.1bn project will be carried out by a Hungarian-Chinese consortium in which RM International, owned by Lorinc Meszaros through BSE-listed Opus Global will have 50% stake. Meszaros is Hungary’s most powerful oligarch and a close friend of Orban. The company expects to generate HUF295bn (€833mn) income from the project between 2020 and 2025.

Finally, lawmakers approved a controversial legislation to ban people from taking fostered work if authorities find their backyard untidy. The number of people in public work programmes have dropped from its peak of 200,000 at the launch of the scheme in the mid-2010 but due to the pandemic, the government is planning to expand the programme to mitigate the worsening labour market.