VISEGRAD BLOG: Race for Prague Castle will be landmark for Czech democracy 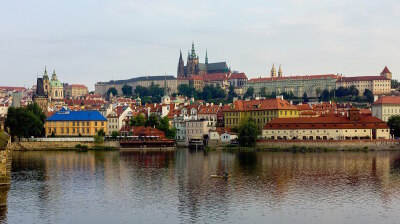 Prague Castle is the largest ancient castle in the world. / Wikipedia
By Robert Anderson in Prague January 11, 2023

Prague Castle, the vast seat of the Czech president on the Hradcany hilltop, looms over the Strakov Academy, the government building, as well as the two houses of parliament below in the Little Quarter.

Like the castle, the Czech president too has often played an outsized role in the country’s politics, one that is much more impressive than the formal powers contained in the constitution. This is what makes the first round of the election of the country’s fourth president this weekend so important.

Milos Zeman, president since 2013 and the first to be directly elected, pushed the president’s powers to the limits and beyond. The former Social Democrat premier pursued his own foreign policy, forging close relations with Russia and China, and often succeeded in vetoing the appointment of ministers he disliked. He even appointed his own technocratic government for seven months after a government crisis in 2013, and he allowed this cabinet – and another formed in 2017 by his ally, billionaire populist Andrej Babis – to continue in office for several months without winning a vote of confidence.

Babis is also one of the leading candidates in the current presidential race, together with former general Petr Pavel and former university rector Danuse Nerudova. The top two candidates in the vote this weekend, in which eight candidates in all are standing, will go through to a run-off on January 27, and the winner of that will take over from Zeman, who cannot stand again, in March.

The presidential race could be a landmark in many ways. If Nerudova wins, she would be the country’s first female president, and that would mean that three of the four countries of Central Europe would have female heads of state.

She would also be the country’s youngest ever president at 43, representing a new generation that came of age after the collapse of Communism in 1989. Whoever wins, the next president will be the first who did not take part in those momentous events, and the first who is not a politician by vocation. (Babis is a businessman and critics argue that he entered politics to protect and advance his business interests.)

The campaign has so far revolved around recondite issues such as Pavel’s communist-era intelligence training and a money-grubbing postgraduate programme at Nerudova’s university. But this week the campaign has come alive. Babis was boosted by being found not guilty in a long-running fraud trial on January 9, and all the candidates have stepped up their attacks on each other as they meet in three key TV debates, the second on January 11 and the final one the day after.

Babis has tried to position himself above the fray, as if the other candidates are competing to challenge him, and will only take part in the final debate. He portrays himself as the only experienced candidate of the three – an image reinforced by a lightning visit this week to French President Emmanual Macron.

"They have no political experience and everything they declare in those debates is bullshit," he said in typically folksy style during a talk show, a format that he prefers to debates, where he often performs poorly.

Babis has tried to polarise the electorate, positioning himself as the only top candidate who is not a government stooge, and making the vote a referendum on Prime Minister Petr Fiala’s government, which he blames for not protecting people from the cost of living crisis.  He has also toyed with criticising sanctions on Russia, though he has been careful not to get too close to the extremists who have staged a series of demonstrations in Prague.

Babis tweeted on January 3: “Our country is suffering…. Petr Fiala's government plunged us into this economic and social crisis. And if they manage to install one of their candidates in the Castle, they will lose any inhibitions. An avalanche will break out. And it will be bad.”

Both Pavel and Nerudova have been endorsed by the centre-right ruling coalition, though they are standing as independents and have tried to take a broad centrist stance and keep their distance from the government. Pavel has depicted himself as a safe pair of hands in troubled times, while Nerudova’s pitch is as the young (female) face of the future.

If Babis were to win, he could try to sabotage the government, and the country’s politics could become much more unstable ahead of the next general election in 2025.  Were his ANO party to win that election, real power could shift to the Castle, with worrying implications for the country’s democracy.

But Babis is also a highly divisive figure, with the final polls indicating that he is likely to make it through to the run-off but he would then be defeated by either Pavel or Nerudova, with Pavel currently narrowly in the lead.

On the other hand, the agro-chemicals tycoon also has his huge fortune, his ANO party vehicle and his media empire, including two national dailies, Mlada Fronts Dnes and Lidove Noviny.

“His chances are much higher than many public polls are predicting right now,” Professor Jiri Priban of Cardiff University told a University College London webcast on the election on January 10.

At a time of growing unrest with the cost of living crisis, Babis should definitely not be written off yet. With a quarter of voters still undecided, the race remains wide open.

VISEGRAD BLOG: Czechs are still in denial about communist rule

VISEGRAD BLOG: When Eastern European states speak out they are now listened to
VISEGRAD BLOG: Slovakia's right wing once again fails the test of leadership
VISEGRAD BLOG: Czechs are still in denial about communist rule