VISEGRAD BLOG: V4 turns into V1 as Hungary’s Orban is left isolated over stance towards Putin 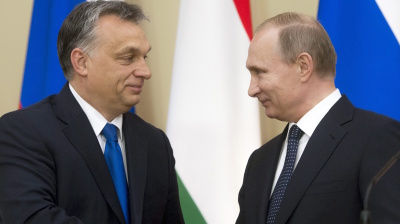 Viktor Orban's position of “neutrality” – which translates as not stepping on President Vladimir Putin’s toes – has caused increasing anger in Poland.
By Wojciech Kosc in Warsaw March 30, 2022

The Visegrad Four (V4) has become the V1 these days as Hungarian Prime Minister Viktor Orban’s reluctance to back tougher sanctions against Russia over its war in Ukraine has left him isolated even by Poland, so far his staunchest ally.

Russia’s attack on Ukraine has redefined allegiances in the Central European grouping of Poland, Czechia, Slovakia and Hungary, with Warsaw becoming a key frontline Nato ally and one which has called for maximum punishment for Moscow.

While the shenanigans of Poland’s ruling Law and Justice (PiS) party have not been forgotten in Brussels, the war has put Poland closer to the heart of EU’s policymaking – pulling it away from Hungary at the same time.

Hungary’s position of “neutrality” – which translates as not stepping on President Vladimir Putin’s toes – has caused increasing anger in Poland.

The rift became a gaping abyss on March 29 after Polish Defence Minister Mariusz Blaszczak decided that he would not show up in Budapest for a V4 gathering, Polish media reported.

Over his last 12 years in power Orban has been able to use the V4 as a megaphone for his own foreign policy and for domestic political purposes. But government changes in Prague and Bratislava, and now his isolation within the group over his stance towards Putin, mean that this is no longer possible and the V4 is becoming moribund. Orban could not even bring the V4 defence ministers to a photo opportunity in Budapest before the elections on Sunday.

“I will not personally go to Hungary for the meeting of V4 defence ministers … I have always supported the V4 and I am very sorry that cheap Russian oil is now more important to Hungarian politicians than Ukrainian blood,” Czech Defence Minister Jana Cernochova said on Twitter.

Last week, Poland’s President Andrzej Duda went as far as warning Orban that his policy was out of tune with the rest of Europe and could prove costly for the Hungarian PM, who is seeking to win the fourth term in office this Sunday.

“I find it difficult to understand also because this policy will turn out costly for Hungary. Very costly,” Duda said.

Duda spoke right after US President Joe Biden’s visit to Poland, which only underlined Poland’s new role in Nato and the EU – and highlighted Orban’s pro-Russian stance even more clearly.

That even Poland snubbed its one-time best friend in illiberalism, might signal a difficult time for Orban, especially as the war is ongoing with ever more evidence of Russian atrocities surfacing daily.

Budapest has refused to allow Western arms to be supplied through Hungary to Ukraine, and Hungary, alongside Germany, is the EU member state most adamantly against using Russia’s energy exports to the bloc as a decisive weapon to damage the Russian economy and finances.

The PM is now looking to secure a fourth term in office in the vote this weekend on April 3 but his stance on Russia’s war against Ukraine might backfire on him at the polling stations, despite the way the state-run and oligarch-owned media have ignored Hungary's increasing isolation.

"The whole campaign agenda has been swept away by the invasion of Ukraine," Andras Bozoki, a professor of political science at the Central European University, told a webcast of the CEU Democracy Institute on March 29. "The agenda is now about the war."

Orban has depicted himself as the leader keeping Hungary safe and out of the war. But Bozoki said Ukraine President Volodymyr Zelinskiy's call for Orban to pick sides in the conflict had had an impact on Fidesz voters, and the war had now become more of a moral issue than a political one. "Voters can think about whether they support someone who is siding with Putin," he said.

"Hardline Fidesz voters will not change their mind," he said. "But it can affect the thinking of the undecided. It can be important," Bozoki said in answer to a question from bne IntelliNews.

VISEGRAD BLOG: Nato rethinks the security of its Eastern Flank