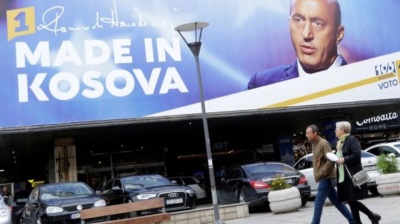 Kosovo's Prime Minister Ramush Haradinaj resigned during the summer when he was named as a suspect by a special court in The Hague
By Iulian Ernst in Bucharest October 15, 2019

Nine of them were hospitalised at University Clinical Center of Kosovo, according to Telegrafi daily.

Health officials have not yet disclosed what the allergic reaction is.

While some accuse “chemical-biological attack on Kosovo”, Srpska Lista (Serb List), the main party representing the country's Serb minority, in a statement alleged that there was an attempt to "manipulate" ethnic Serb votes.

Germin observer Shpetim Shujaku said that the 26 CEC officials, when they opened the envelopes, started having reactions, some experienced redness on their hands, itching and some signs around their eyes.

"When these envelopes were opened they had a very heavy odor and they smelled and some of the CEC officials who had physical contact with these envelopes started having reactions, some had hand redness, itching and some signs around the eyes. Then the chief official Besnik Buzhala made the decision to suspend the process indefinitely, until the forensics verification of the package is done,” he explained.

The “poisoning” of CEC officials during the vote count, after the opening of envelopes coming from Serbia, is seen by security expert Avni Islami as a chemical-biological attack on an institution, and also on Kosovo itself. However,

Islam in a statement to the Telegraph said that the Kosovo Intelligence Agency (KIA) as well as all security institutions should be on alert for 24 hours.

“What happened at the ballot counting center shows that the responsible institutions did not prevent a 'chemical-biological attack' through the envelopes,” Islami told the Telegraph.

The Vetevendosje Movement (the opposition party that won October 6 elections based on votes counted so far) has also reacted after the poisoning of CEC employees by mail, calling on state authorities to investigate the causes of this poisoning.

Separately, Srpska Lista (Serb List), the main party representing the country's Serb minority, alleged that there was an attempt to “install” a Serb parliamentarian that it said would be acceptable to Albin Kurti's leftist-nationalist Vetevendosje (Self-Determination) party, which won the most votes in the October 6 general elections.

The Belgrade-backed Srpska Lista party is expected to win the 10 seats in the 120-seat parliament that are reserved for ethnic Serbs, the country's largest minority group.

Vetevendosje, headed by Albin Kurti (who spent 2 1/2 years in a Serbian prison for his pro-independence actions) defeated center-right political groupings formed by former Kosovo Liberation Army (UCK) fighters who had governed since 2007.

But his party did not garner enough votes to govern on its own and has started talks with the center-right Democratic League of Kosovo (LDK) to form a coalition.