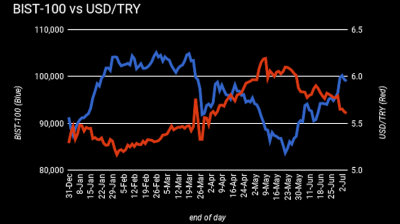 VTB Capital believes it is not worth chasing the current rally in Turkish assets, and that in fact it is worth taking profits from a trading perspective, Akin Tuzun of VTB Capital said on July 4 in the latest release of VTB’s regular Turkey Trade Monitor report entitled “Taking profits in our trading Buy call”.

Since VTB’s last Trade Monitor entitled “Buy into weakness territory” that was released on June 19, the Turkish equity market has rallied 16% in dollar terms, led by the banks, which gained 27% in US dollar terms.

“This was a particularly strong rally in a short period of time, outperforming EM indices by 16% during that period. We believe it is not worth chasing this rally, and that in fact it is worth taking profits from a trading perspective. The banking index is at the top of our ‘Neutral’ zone and almost at ‘Sell into Strength’ territory. The short-term sentiment has indeed improved, with positive developments on both domestic and international political stages. The global interest rate backdrop also remains supportive for high beta EMs like Turkey,” Tuzun said.

“Nevertheless, the risk reward is once again more balanced and thus it makes sense to take profits”, in his view.

The Turkish equity market (BIST100) has been on an upward trend since 2008, but on May 22 it touched the bottom trend line and bounced.

On the other hand, the banking index has been much weaker and broke the long-term upward trend a year ago.

In US dollar terms, however, the picture is different. Both the main index and the banking index are close to or at their historical lows, while the banking index is well below the 2008-09 financial crisis lows.

Positive catalysts such as the end of election uncertainty, improved sentiment toward US-Turkey relationships after President Donald Trump’s comments at the G20 summit, a continued favourable global backdrop, and inflation falling to the mid-teens and giving room for healthy rate cuts, have already been priced in, according to Tuzun.

“However, the two-year benchmark bond yield has already eased to 18% levels from as high as 26%, and the current valuations of Turkish equities seem at best fair in the [cost of equity] context,” he added.

Turkey continues to have the highest interest rates in the main EM universe, with a central bank effective rate of 24% and five-year sovereign bonds yielding 17.3%.

The central bank rate is now 8.3% above the latest inflation print of 15.7% as of June, which clearly indicates a rate cut at the upcoming Monetary Policy Committee (MPC) meeting, according to Tuzun.

However, the current market rates such as the two-year benchmark domestic government bond yield standing at 18% already factor in the rate cuts VTB anticipates from the central bank in H2.

If the Central Bank of the Republic of Turkey (CBRT) cuts rates by more than 200bp prematurely, it might well be negative for the markets and particularly for the lira, according to Tuzun.

Turkish equities trade at 7.2x forward P/E, the second lowest after Russia, and at discounts of 45% to global emerging markets (GEM) and 30% to EMEA.

Turkey’s discount to GEM and EMEA has been widening visibly since the beginning of 2015, and has reached the record high levels of the past ten years.

These nominal discounts look attractive in the historical context; however, when VTB puts interest rates into the context, Turkey does not look cheap.

VTB calculates the implied fair discount of Turkey to the GEM and EMEA regions based on a weighted average cost of equity calculation for Turkey and GEM, and taking into account the respective weights of the countries in the MSCI indices.

“The implied discount to GEM seems fair, but compared with EMEA, the implied fair discount is more than where is Turkey trading at the moment. Based on forward P/Es in the context of 5-year sovereign bond yields (as the risk-free rate), the Turkish equity market looks to be trading at a premium, while Turkish banks look fairly valued,” Tuzun also said.

The Turkish lira remained the worst performing EM currency YTD in 2019, after being the worst currency since 2013.

“In fact, recent developments have been in favour of the lira: rising expectations of a Fed rate cut in 2019, the falling trend in inflation, the reversal of dollarisation of local depositors and the narrowing current account deficit. On the other hand, the widening fiscal deficit, lack of confidence in the Turkish Central Bank, and domestic and geopolitical risks continue to weigh on the lira,” Tuzun added.

In the past two weeks, the foreign investor share in the free float of Turkish equities has increased from 64% to 65.2%, which is near the top of the 61-66% band that has prevailed for the past eight years.

The weekly front loan-deposit spread (in Turkish lira) of the banking sector has dropped again from 7% to 5% levels, which also supports VTB’s trading call for profit taking.

“The end of the election saga and improved sentiment on the S-400 dispute, fuelled the rally in the market. Domestic political risks improved significantly, but cannot be ignored completely, with regards to the possibility of a new political party establishment by [the ex finance minister Ali Babacan also supported by the ex-president Abdullah Gul]. Also, despite the positive sentiment after the Trump-Erdogan meeting at the G20, there is still ambiguity with regards to S-400, and the 31 July deadline of the US for Turkey to cancel its S-400 purchase is nearing, so the risk of potential US sanctions is not completely off the table,” Tuzun said.

“There is a possibility that [the new party led by Babacan/Gul] may attract some MPs from AKP [the Justice and Development Party] and potentially take total MPs of AKP/MHP [Nationalist Movement Party] alliance below 300 in the parliament. Even though none of the parties (both ruling and opposition) want early elections, a potential change in MP dynamics might add some political risk premium to the market, though not in the near term,” he added.

Based on both VTB’s and the market’s (per Bloomberg data) future return on equity (ROE) forecasts, state-run lenders Vakifbank and Halkbank continue to trade at deep discounts to private banks.

Vakifbank trades at the same discounts that Halkbank trades at, despite Halkbank’s company-specific risks; thus Vakifbank’s risk-reward profile looks better, according to Tuzun.

“State banks have underperformed YTD in 2019, mostly amid their aggressive lending policy during 1Q19, which seemed to be politically influenced and irrational from the market’s point of view,” Tuzun added.