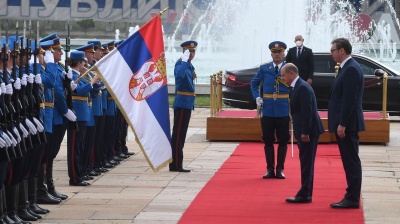 The differences between Belgrade and the EU – an organisation Serbia hopes to join – over the Russian war in Ukraine were on display at a joint press conference by German Chancellor Olaf Scholz and Serbian President Aleksandar Vucic on June 10.

Vucic restated Serbia’s position that it will not join western sanctions on Russia despite appeals from Scholz to fall into line with EU members and fellow candidate states.

Scholz called the war a "terrible, senseless war that was instigated for an imperialist vision of Russia”.

“That's why it's so important that the European Union and that we all stand in solidarity with Ukraine and help it defend itself against this attack,” he said. “Our expectation is that these sanctions will also be supported by all those who are candidates for EU membership.”

The tour also included visits to Kosovo and North Macedonia, both of which Scholz praised for aligning with EU sanctions. It took place just weeks before the upcoming EU Council meeting on June 23, at which enlargement will be discussed by EU members.

Vucic told the press conference that Scholz had asked Serbia to join the sanctions imposed by the EU against Russia.

"We talked about the political situation in the world, and Scholz asked Serbia in a very decisive, clear and sharp way to join the sanctions against Russia, that is, to support the restrictive measures that the EU has already adopted against Russia," Vucic said.

Taking a line previously used by Moscow, Vucic drew comparisons between Russia’s invasion of Ukraine and the Nato bombings of Serbia in 1999.

Scholz also discussed the issue of issue of Kosovo, which declared independence from Serbia in 2008. Apparently taking Serbian officials by surprise, earlier in the day in Pristina Scholz said the two states could only join the EU if they recognised each other as independent states – something Belgrade has consistently refused to do.

He said it was “inconceivable” that two countries that do not recognise each other would become members of the EU.

Commenting on the issue at the press conference, Vucic said that “for the first time, someone from Europe [Scholz] was heard asking Serbia for mutual recognition with Kosovo”.

“We do not respond to pressure in this way,” he added.

However, there were also more positive exchanges, with Vucic saying Scholz had “brought new hope” for everyone in the Western Balkans on the issue of EU enlargement.

“He wants there to be a real prospect of joining, not just buying time. We also talked about what that means … We have seen from the reports that our country must make progress on the issue of the rule of law, freedom of the media and many other issues," Vucic said.

“We have absolute confidence in Chancellor Scholz and his words that he is very committed to the progress of the Western Balkans towards the EU.”

The Serbian president forecast that if progress is made in the dialogue with Pristina and on the rule of law, “significant progress” in the EU accession process can be expected in December.

According to the Serbian president, trade with Germany increased by 25.7% year on year in the first four months of 2022, and is expected to reach €7.5bn by the end of the year.