War, huh… What is it good for? 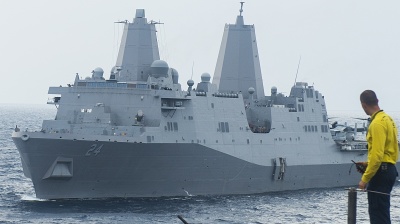 The USS Arlington amphibious assault ship was last week dispatched to the Gulf.
By bne IntelliNews May 14, 2019

The question of whether tensions between the US and Iran are heading towards a military showdown was taken on from all angles on May 14 with the Islamic Republic’s supreme leader and the Commander-in-Chief weighing in.

Ayatollah Ali Khamenei provided comments to senior officials carried by state television, in which he said: “There won’t be any war. The Iranian nation has chosen the path of resistance. We don’t seek a war, and they don’t either. They know it’s not in their interests.”

Donald Trump denied a New York Times report that US officials were discussing a military plan to send up to 120,000 troops to the Middle East to counter any attack or acceleration by Iran of its nuclear development programme.

He told reporters at the White House: “I think it’s fake news, OK? Now, would I do that? Absolutely. But we have not planned for that. Hopefully we’re not going to have to plan for that. And if we did that, we’d send a hell of a lot more troops than that.”

Iranian ambassador to the UK Hamid Baeidinejad warned that Europe has 60 days to ease Iranian oil sales in the face of US sanctions designed to push them to zero or else see the end of the nuclear deal that Iran, the UK, France, Germany, China and Russia are still signed up to despite Trump unilaterally withdrawing the US from the accord in May last year saying a tougher agreement is needed to tackle issues including Iran’s “malign” activities in Middle East conflict zones.

The ambassador also insisted that Iran was not involved in the sabotage of two Saudi oil tankers in the Oman Gulf at the weekend and early hours attacks that damaged two other vessels in the vicinity.

“We do not know who attacked the tankers. It’s very serious for us. This is very dangerous and suspicious,” he said.

In further remarks on Iran indicating that it could soon start moving towards the exit door of the nuclear deal, Baeidinejad said: “Even in Iran there are many institutions and politicians that believe we have been late in responding to the situation. We have tried to be patient over a year, but we cannot continue to allow the JCPOA [Joint Comprehensive Plan of Action, the formal name of the nuclear deal] to be in a total collapse so something needed to be done. If the other side believe that Iran can just continue to be patient, we have passed that stage.

“Our government is expected by its people to respond to the negative developments that have occurred. It is time we should make some decision—not to undermine the nuclear deal but give the necessary message to the international community that the JCPOA is under immediate threat. The fundamental achievement of multilateral diplomacy is in danger of collapse.”

Iran sees the JCPOA as dysfunctional because of the sanctions the US is using to strangle its economy while warning off foreign companies and other countries from doing business with the Iranians with threats of secondary sanctions. The JCPOA is supposed to protect Iran from heavy sanctions in return for measures designed to bar any potential path it might take to developing a nuclear weapon. The remaining signatories of the nuclear deal say Iran remains in compliance with those measures, as do UN nuclear inspectors.

Top British general says “no increased threat”
May 14 also saw the top British general in the US-led coalition against Islamic State tell reporters that there is no increased threat from Iranian-backed forces in Iraq or Syria. That flew in the face of US assertions used to justify a military buildup in the region that has included the arrival of an aircraft carrier, an amphibious assault ship, Patriot missiles and a B-52 Stratofortress bomber task force.

Maj Gen Christopher Ghika, deputy commander of Operation Inherent Resolve, the coalition conducting counter-terrorist operations against Islamic State in Iraq and Syria, was asked about the threat from Shia militias in Syria and Iraq.

“No–there’s been no increased threat from Iranian-backed forces in Iraq and Syria,” Ghika said in a videolink briefing from Baghdad to the Pentagon. “We’re aware of that presence, clearly. And we monitor them along with a whole range of others because that’s the environment we’re in. We are monitoring the Shia militia groups. I think you’re referring to carefully and if the threat level seems to go up then we’ll raise our force protection measures accordingly.”

Critics of the hawks in Trump’s administration worry that fabricated or exaggerated intelligence could be used to advance the case for war against Iran in a manner reminiscent of events leading to the Iraq invasion.

The Shia militias in Iraq are collectively known as the Popular Mobilisation Forces (PMF). The ties of the militias to Iran are varied.

In his briefing, Ghika added: “We’ve seen no change in the posture or the laydown of the PMF. And of course the PMF is a moniker for a very broad range of groups. So I think it’s important to say that many of them are compliant and we have seen no change in that posture since the recent exchange between the United States and Iran. And we hope and expect that that will continue.”

Gulf tensions rose further on May 14 when Saudi Arabia reported that armed drones had attacked two of its oil pumping stations that serve a pipeline designed to take crude to the Red Sea (project planners deliberately routed it away from more exposed and volatile Gulf locations).

Saudi Energy Minister Khalid al-Falih said that the drone attacks caused a fire and minor damage to one pumping station. He indicated that the strikes and sabotage of the tankers were the work of Iranian proxies.

“These attacks prove again that it is important for us to face terrorist entities, including the Houthi militias in Yemen that are backed by Iran,” Falih said in a statement.

The Houthi militias have claimed responsibility for the drone attacks.

Retaliatory and offensive options ‘laid out’
Late on May 14, Newsweek released a report on how when Trump’s top national security team met for a classified meeting at the Pentagon on May 9, Acting Defense Secretary Patrick Shanahan (described as a “yes-man” to Trump by a US Defense Department official in the article) laid out several US military options for Iran, separated into two distinct categories: retaliatory and offensive.

It also cited one Pentagon source as saying that the meeting did not equate to the US beginning the early stages of war. Instead, they said, it was a show of force against Iran and part of a strategy aimed at diplomatic resolution. "It’s just flexing muscles," the official reportedly said.

Another Pentagon source told Newsweek that if anything is likely to happen involving the preliminary Iran options, it would involve a heavy guided missile strike campaign in an attempt to lead Tehran to the negotiation table with Washington. "It depends on the escalation of force. But no matter the bravado from Iran’s side, when you get hit with 500 missiles every day, it degrades you, which is the objective. When your opponent is weak, you get more out of any negotiation," one official with knowledge of the Iran plans was reported as saying.

The EU has carefully avoided giving hawks in the US administration any encouragement for their Iran policy and on May 14 Spain announced that it has withdrawn a frigate from a US-led naval group in the Gulf. The move was made on the grounds that the naval group had changed its mission from celebrating 500 years of the first circumnavigation of the globe to following up on alleged threats from Iran.

‘Hermit nation’ has been crisis-stricken ever since the previous energy price collapse. Reduced demand for gas from COVID-19 impacted China, savage windstorms and pandemic impacts on food imports move it ever nearer the edge.

Russia has emerged as a safe haven for investors during the coronavirus (COVID-19) pandemic that has rocked capital markets around the world, according to a paper from the Institute of International Finance (IIF).

Foreign share of Ukraine's domestic bonds falling, demand for fresh debt spluttering
2 hours ago
Russia’s VTB trapped in a London lockdown until 2024
13 hours ago
Movie night at the airport
5 days ago
Raw feelings in Turkmenistan as Berdimuhamedov pays 3.51 to the dollar
6 days ago
Russian OFZs are an Emerging Markets investor's safe haven
6 days ago