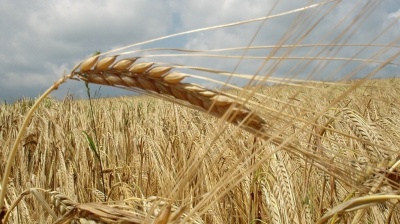 If Russia invades Ukraine that would destroy its grain production and send global prices soaring at a time when they are already at multiyear highs, recreating the conditions for an Arab Spring / wiki
By Ben Aris in Berlin January 28, 2022

Ukraine together with Russia is one of the world’s biggest grain exporters and already the main source of wheat for many developing countries. A Russian invasion of Ukraine would smash its agricultural sector, with the shock waves rippling out across the world.

Agricultural reforms and the development of the business has been one of the few bright spots in the economy in recent years and the export of grain has become the largest source of foreign exchange earnings for the budget.

The country has been enjoying bumper harvests in recent years and Ukraine set a new record harvest in 2021 for the fourth year in a row in 2021.

Ukraine exported $27.9bn worth of agricultural products in 2021, almost a quarter more than the previous record $22.4bn set the year before in 2020, according to the Institute of Agrarian Economics.

At the same time, in 2021, the share of agricultural products as a percentage of total Ukrainian exports decreased from 45% in 2020 to 41%, partly thanks to soaring commodity prices, especially metal, while grain exports maintained their record-breaking growth rate.

Agriculture Minister Roman Leshchenko said in December the country harvested a record 84mn tonnes of grain in clean weight in 2021, up from 65mn tonnes in 2020.

Of the total grain output, Ukraine exported roughly 18mn tonnes of wheat out of a total harvest of 24mn tonnes in 2020, making it the world’s fifth-largest exporter.

And this year will be even better. Ukraine has exported 33.2mn tonnes of grain so far in the 2021/22 July-June season, up 25.7% from the same stage a season earlier, Ukraine’s Agriculture Ministry data showed as of the start of January, reports Reuters.

The ministry said the 2021/22 exports are on track to include 24.5mn tonnes of wheat this year, allowing exports at the end of the agricultural marketing year in June to be even bigger than in the last two years.

After Ukraine turned away from Russia since the annexation of Crimea in 2014, trade with Europe has soared. Ukraine already ranks fourth in the supply of agricultural products to the EU and 14th in terms of agricultural imports from EU countries.

But the unintended benefit of breaking off trade relations with Russia has been the rapid diversification of Ukraine’s exports worldwide. In particular, it has developed new trade deals with North Africa and the Middle East.

Amongst the main customers are China, the EU and Lebanon, but the largest consumer of Ukraine’s wheat is Egypt, which imported more than 3mn tonnes in 2020 – about 14% of its total supply.

Ukraine wheat imports also account for between a fifth and a quarter of the wheat imports of Malaysian, Indonesia, Bangladeshi and the Middle East, according to FAO data as cited by Foreign Policy.

This year the harvest should be even better and could break the record yields for the fifth year in a row, according to agricultural experts. The cold winter has covered the fields with snow, which is good for crops, protecting them from the frost.

With 42mn hectares of farmland covering 70% of the country and about 25% of the world’s reserves of black soil, Ukraine’s agribusiness sector remains the most promising sector of the economy.

But Ukraine’s very success in building up global wheat exports could turn out to be a major headache for the rest of the world if the current showdown with Russia comes to blows.

Blood on the black earth

Ukraine was famous as a Soviet breadbasket. Its “black earth” regions have some of the most fertile earth in the world, but most of these regions lie in the east of the country – Kharkiv, Dnipropetrovsk, Zaporizhia – that would all be the first to be overrun by an invading Russian army should war break out. The most exposed is the Kherson oblast, which lies just west of Donetsk and Luhansk, where an undeclared war with Russia has already been raging for seven years.

Russia’s troops are massed in bases close to Ukraine's eastern border, so the grain producing regions are the first ones that an invading force would reach.

While bne IntelliNews has reported that a full-scale invasion is highly unlikely, smaller-scale military operations remain more than possible. One scenario that would affect agricultural production that is possible is for the Kremlin to flood the Donbas with more weapons and scale up the conflict in Donbas, which would not require Russians soldiers to cross the border but could see fighting extend beyond the current line of contact and so affect farming in the neighbouring regions – something that the Kremlin has suggested in the last week it is contemplating.

An escalation could seriously disrupt Ukraine’s agricultural production and that would only exacerbate the global inflation in food prices, which is already a major economic headache for central bankers everywhere.

It would cause price hikes in the cost of bread and other staples in a number of countries like Libya, Yemen and Lebanon that are all already heavily dependent on Ukraine wheat imports but not stable economies.

The nightmare scenario is that this could recreate the conditions that sparked the Arab Spring at the start of the last decade that were caused by a sharp jump in food prices. Currently food price inflation is already on a par with that of the Arab Spring era in Tunisia and Egypt.

“Last time global food price inflation was running as hot as in 2021 was 2011, setting the scene for the Arab spring,” tweeted Adam Tooze and academic with Columbia University. 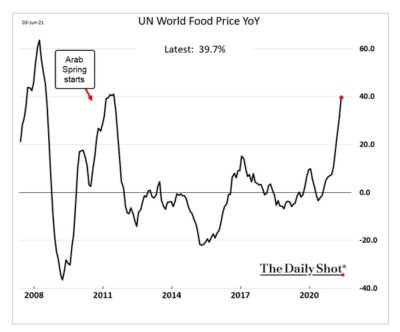