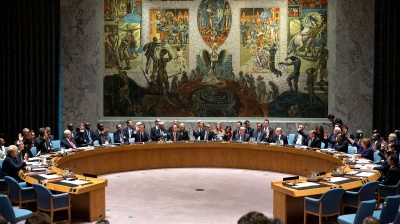 There is no procedure for expelling Russia from the UN Security Council, but western allies may move to expel it from the Human Rights Council, and could also vote to remove it from the General Assembly. / Image: bne IntelliNews.
By Theo Normanton April 5, 2022

As Russia’s retreat from the north of Ukraine uncovers further evidence of what appear to be war crimes, western nations are retaliating by downgrading their diplomatic relations with Russia.

A group of Republican Senators from the US are trying to get Russia removed from the UN Security Council. It used this position earlier to veto a resolution condemning its own invasion of Ukraine.

“Putin has demonstrated in plain view his ruthlessness and complete disregard for humanity and our international norms, and the idea that he and his cronies should have a vote on the UN’s Security Council is an absolute disgrace,” said Senator Joni Ernst of Iowa.

Yet the efforts of the Senators are more symbolic than practical: removing a permanent member of the Security Council is impossible. In order for Russia to be kicked off the UN Security Council (UNSC), a recommendation to expel it would have to be passed by all five members of the UNSC – including Russia and China.

No country has been expelled from the UN since it was founded in 1945.

Instead, it is more likely that Russia will be removed from the UN Human Rights Council (HRC). US Secretary of State Antony Blinken announced on Monday that America would seek a vote to expel Russia from the HRC.

"We cannot let a member state that is subverting every principle we hold dear to continue to participate in the HRC, nor should it hold a position of authority and use its seat on the council as a tool for propaganda," State Department spokesman Ned Price said.

A simple majority of two-thirds of members would be required to remove Russia from the HRC. The UN Human Rights Council suspended Libya in this way in 2011 over Gaddafi’s violent crackdown on anti-government protests.

Such a vote would be likely to pass. Russia only enjoyed the support of four other nations in a recent UN resolution to condemn Russia’s aggression in Ukraine.

On Monday, 4 April, US President Joe Biden called for Russian President Vladimir Putin to face a war crimes trial, saying he "should be held accountable."

Another option is for diplomats to suspend Russian officials from speaking and voting at the UN General Assembly, a move which would not need to be passed by the Security Council. This last happened in 1974, when diplomats suspended South Africa from the General Assembly due to its system of apartheid.

Also on Monday, Lithuania announced the expulsion of its Russian ambassador in response to the accusations of murder of Ukrainian civilians by Russian soldiers.

The Kremlin denies the accusations, saying that photos of corpses and graves were staged by Ukraine in an effort to secure more military aid from the West.

At least 1,430 civilians have been killed in Ukraine and 2,097 injured, according to UN estimates, but the true figure could be higher.