“Where is the $128 billion?” posters plastered across Istanbul ask Erdogan 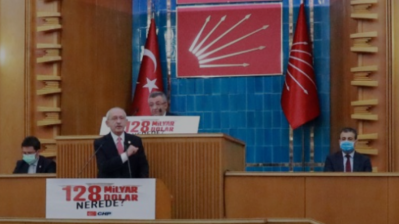 By now the figure of “128” is taking on a special significance for many Turks mired in their country’s economic crisis. And the main opposition Republican People’s Party (CHP) is determined to keep it at the forefront of people’s minds. “Where is the $128 billion?” asked posters on billboards put up around Istanbul in an effort to embarrass and irritate President Recep Tayyip Erdogan and his ruling Justice and Development Party (AKP), who have yet to come up with a satisfactory answer.

The sum refers to the dollars burnt up by state banks in a failed attempt to support the Turkish lira on foreign exchange markets during 2019-20.

The message on the posters was clearly hitting home in an uncomfortable way with somebody as police, in some instances, resorted to using cranes as they took the posters down. The CHP, which holds the mayorship of Turkey’s cultural and commercial capital, responded by saying it would keep putting them back up. 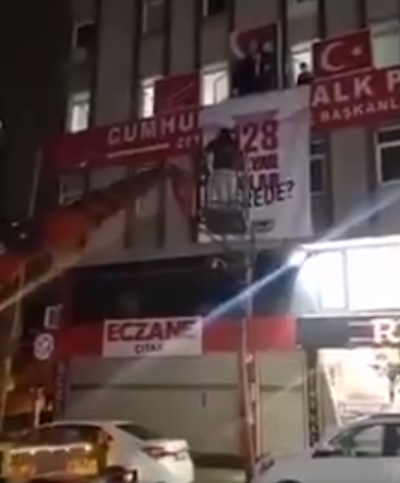 Police resorted to using cranes as they set out to take down the posters put up across Istanbul (Image: Duvar English, social media screengrab).

The question of the missing billions, meanwhile, trended on social media and the AKP blocked a CHP call for a parliamentary debate on the controversy.

Erdogan has claimed that the dollar sales, backed by the central bank with swaps, helped to support the economy, but they left Turkey’s reserves with little ammunition to speak of, meaning the economy is now even more exposed to a deepening crisis. Opposition politicians are concerned by the lack of transparency that surrounded the sales—conducted under Erdogan’s son-in-law Berat Albayrak, who, under heavy fire over his failed defence of the lira, quit his post as finance minister last November—and are demanding to know more about what transpired.

“[Erdogan] says ‘you cannot even ask me questions’,” CHP leader Kemal Kilicdaroglu was reported by Reuters as telling party members on April 13, accusing the AKP of stifling debate. “Those leading the country must give an account to the people.”

Kilicdaroglu added that a prosecutor had ruled that some posters that bore a silhouette of the presidential palace were an insult to Erdogan. Insulting the president is a crime in Turkey.

The lira has lost more than 50% of its value since end-2017. It held around 6.85 versus the dollar between May and August 2020, a fact that economists have attributed to the forex sales. Prior to Albayrak’s resignation and after the FX sales stopped, it weakened to a record low of 8.58. With the country on the point of descending into its second balance of payments crisis in just over two years, Erdogan revamped his economic team. The lira was trading at around 8.08 as April 14 drew to a close.

The CHP first posed the question about the sales in February. That prompted Erdogan to defend the legacy of Albayrak, sparking market jitters that he might be invited back into the cabinet.

At the same time that Albayrak abruptly resigned in November, Erdogan named Naci Agbal as governor of the central bank, indicating to the markets that he was ready to swallow the “bitter pill” of monetary tightening in the battle to assist the lira and tackle double-digit inflation. Agbal went ahead with 875 bp of interest rate hikes in the course of around four months, but Erdogan—who by now has something of a reputation as a “boom and bust” populist politician who fuels economic growth with cheap money—then caused market disarray in March by firing his new central bank chief. Reuters reported that the sacking came about partly because Erdogan was uncomfortable with the central bank’s investigation into the FX sales.

The FX net buffer was $10.7bn on April 2, the lowest in at least 18 years, central bank data shows. Excluding $41.1bn in outstanding swaps, the reserves are in deeply negative territory.

The CHP has asked how the sales were conducted and at what rate. AKP lawmaker Nurettin Canikli responded that they were all conducted at market rates.